David Atkins labels Ted Nugent "a buffoon" and "to a certain degree" Representative Steve Stockman, the Texas Republican who invited the pro-gun, anti-Obama, one-hit wonder of long ago to tonight's State of the Union address.

Not so, Atkins argues, are Alan Simpson, Erskine Bowles, John Boehner, and President Obama, who are desperate to cut Medicare Social Security, Medicaid and the WIC program, and who ignore climate change and promote militarization of our police force.

Dictionary.com defines "buffoon" as "a clown; a jester" as well as "a person given to clowing and joking" and "a ludicrous or bumbling person; a fool."   So, yes, Nugent and possibly Stockman fit the bill while, as Atkins notes, "The Washington Consensus types love to clutch their pearls over the Sarah Palins, Ted Nugents, and Todd Akins" while lauding far more dangerous individuals such as the aforementioned SimpsonBowlesBoehnerObama.

Fittingly, two-and-a-half hours earlier Atkins had written about another "Serious Person" enjoying a honeymoon with the Washington Consensus folks, for he is no fool, no bumbler, or jokester, but a leading candidate for his party's presidential nomination.  He also sounds reasonable and is Hispanic, for which he gets extra points from a media which is exorcised about the anti-science, anti-middle class, anti-gun safety party because it doesn't like ethnic minorities.

He is Marco Rubio, who will be delivering the official official (the other, by Rand Paul) Repub response to the State of the Union message.  Atkins slams Rubio's remarks, as projected in the preview by the Weekly Standard's Chris Hayes, who comments in his love letter

Rubio also wants to take arguments about debt from the theoretical and the long-term to the immediate and the short-term. “I think we have to link the debt to their lives. People understand that we have this debt and that their kids are going to get saddled with this in the future. And I think that’s a compelling argument. But I think an even more compelling argument, in conjunction with that one, is to explain to people how the debt is hurting them right now.”

“The debt has a direct impact on unemployment. Ever dollar that is being lent to the government is a dollar that is not being invested in our economy,” he says. “The immediate danger of the debt, and the one that speaks to people in the real world, is the fact that the debt is contributing to the fact that they don’t have a good job.”

As George W. Bush ran up the deficit and the debt with two wars not paid for, a prescription drug benefit cherished by the pharmaceutical industry but not paid for, and cuts in the income tax rate, Rubio said... nothing.  Now, as Jeff Graham of Investor's Business Daily puts it, "Here's a pretty important fact that virtually everyone in Washington seems oblivious to: The federal deficit has never fallen as fast as it's falling now without a coincident recession" (chart, from Ezra Klein from CBO and OMB figures, immediately below).

Now the fact-starved Rubio is concerned about the deficit; now, he wants to cut spending, even though, as the graph (from the St. Louis Fed via Krugman's blog) below indicates, government spending has risen at a far lower rate in the Obama Administration than it did in the Bush 43 Administration. 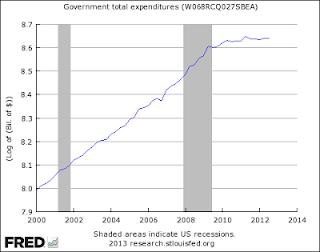 Slashing spending won't bring the nation out of its economic slump.  Rubio claims "every dollar that is being lent to the government is a dollar that is not being invested in our economy." But heads of corporations are practically going on strike, hoarding $1.9 trillion rather than investing them in the U.S.A. because they hope Congress allows them to repatriate profits without paying taxes.  Paul Krugman explains

Which means that we're awash in excess savings. And if you decide to save more, it's not actually going to help society. I mean, things add up. If there's a crucial, one crucial thing to understand about all this it is that the global economy, money moves around in a circle. And my spending is your income, and your spending is my income. And if all of us try to spend less because we want to save more, we don't succeed. All we end up doing is creating a global depression...

There are some other things you can do. Debt relief, where you can do it, will help because it will make people able to spend more. There're some things that the, maybe the Federal Reserve can do, even though interest rates are zero. But the core thing, the thing that we know works, the thing that all the evidence of history says works in a situation like this is the private sector won't spend, government can step in and provide the spending that we need in order to keep this economy afloat.

Rubio apparently will demonstrate impressive economic ignorance and equally impressive sleight-of-hand.   The dollars lent to the government are those not invested in our economy, maintains the Florida Senator, suggesting that these are revenues from the American people.  But tax revenue is not returned to taxpayers on a dollar-for-dollar basis and are not meant to be, but instead are spent on defense, Medicare, etc.  Rather, those "lent" to the Federal government come from foreign banks and governments and therefore are not dollars "not being invested in our economy."  They are, in fact, dollars which are being invested in our economy.  Pretty slick, Senator.

Ultimately, however, facts matter little to Marco Rubio and only slightly more to the likes of Alan Simpson and Erskine Bowles, included among those about whom Krugman observes:

The deficit scolds dominating policy debate will, of course, fiercely resist any attempt to downgrade their favorite issue. They love living in an atmosphere of fiscal crisis: It lets them stroke their chins and sound serious, and it also provides an excuse for slashing social programs, which often seems to be their real objective.

But neither the current deficit nor projected future spending deserve to be anywhere near the top of our political agenda. It’s time to focus on other stuff — like the still-depressed state of the economy and the still-terrible problem of long-term unemployment.