It was August 8, 2017 when Pyongyang and Washington were playing a game of chicken and President Trump took a break from golf in the suburbs of New Jersey and declared

At the United Nations on September 19, he boasted "The United States has great strength and patience, but if it is forced to defend itself or its allies, we will have no choice but to totally destroy North Korea. Rocket Man is on a suicide mission for himself." (Such allies evidently would not include Montenegro.)

North Korean Leader Kim Jong Un just stated that the “Nuclear Button is on his desk at all times.” Will someone from his depleted and food starved regime please inform him that I too have a Nuclear Button, but it is a much bigger & more powerful one than his, and my Button works!

No Russian prostitute has yet stood up and disputed that claim, so score one point for Trump.

There were other ostensibly angry and/or insulting remarks made between the two, including (at the UN speech) "If the righteous many do notconfront the wicked few, then evil will triumph," demonstrating yet again that Trump either doesn't understand Scripture or is as in the past telegraphing to his evangelical base that he doesn't care.  However, these were the most provocative.

And then there was this, in which President Trump gave to arguably the most brutal dictator in the world the credibility he could only dream of being given by any other USA president: 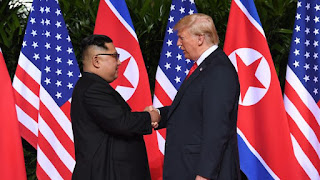 Once they signed a meaningless document, Trump spun the summit in Singapore as a huge success and North Korea went on its merry way continuing its nuclear program.

Only this past Sunday, there was....

To Iranian President Rouhani: NEVER, EVER THREATEN THE UNITED STATES AGAIN OR YOU WILL SUFFER CONSEQUENCES THE LIKES OF WHICH FEW THROUGHOUT HISTORY HAVE EVER SUFFERED BEFORE. WE ARE NO LONGER A COUNTRY THAT WILL STAND FOR YOUR DEMENTED WORDS OF VIOLENCE & DEATH. BE CAUTIOUS!
— Donald J. Trump (@realDonaldTrump) July 23, 2018


Relax, everyone. Trump- and the GOP generally- seem to have a special contempt for Tehran, and the President terminated the agreement made by the Obama Administration with Iran. However, that was because it was Obama-made, and because it was working.

President Trump would like nothing more than eventually to schedule a summit with Hassan Rouhani. His surrogates could claim that Iran was intimidated into it by a President willing to talk "tough." Trump would get a lovely photo-op out of it, could make one of his classic bad deals and call it a "win."

We've been down this road before. Trump always surprises, me especially. Still, he likes to defuse dangerous situations which he himself made dangerous, then declare victory, and this is a more likely scenario than nuclear war.