This sort of thing has to stop. In his excellent Washington Post column, Paul Waldman cites the most relevant passage in Maureen Dowd's column about her interview with House Speaker Nancy Pelosi:

I asked Pelosi whether, after being the subject of so many you-go-girl memes for literally clapping back at Trump, it was jarring to get a bad headline like the one in HuffPost that day — “What The Hell Is Nancy Pelosi Doing?” The article described the outrage of the Squad, as Alexandria Ocasio-Cortez of New York, Ilhan Omar of Minnesota, Rashida Tlaib of Michigan and Ayanna Pressley of Massachusetts are known.

Pelosi feels that the four made themselves irrelevant to the process by voting against “our bill,” as she put it, which she felt was the strongest one she could get. “All these people have their public whatever and their Twitter world,” she said. “But they didn’t have any following. They’re four people and that’s how many votes they got.”

Waldman notes "Pelosi seems gripped by the belief that voters will punish Democrats if the party is too mean to Trump, or uses its institutional power too aggressively and fails to Get Things Done." He justifiably complains

For the life of me, I can’t understand why Pelosi can’t just say, “I get where they’re coming from but we just happen to disagree on this, and that’s fine,” and leave it at that. But she seems unable to keep herself from showing contempt for the fact that younger members such as Ocasio-Cortez have large social media followings (“their public whatever and their Twitter world”), as though she doesn’t understand this newfangled technology and therefore it must be stupid and irrelevant. She’s often equally dismissive of their policy priorities, calling the Green New Deal “the green dream or whatever they call it.”

More succinctly, Charlie Pierce  asserts "Don't pick unnecessary fights with your own people, especially in the public prints. The press is not your friend, nor is it supposed to be" (and Maureen Dowd, as he understands, is the master of snark and nothing else).

One twitterer, however, may as well have justified Pelosi's cheap shot. ("Get off my lawn," she might have phrased it.) He links to the Waldman piece, entitled "Why is Nancy Pelosi doing this," and remarks (emphasis his) "My question exactly. Bitter older woman reprimanding the youthful women of color is NOT A GOOD LOOK."

The Speaker said nothing, implied nothing, suggested nothing about individuals "of color," not of color, African-American, Arabic, Latina, or whatever. In the video below, Pelosi is seen striking out (at approximately :51) against then-NBC correspondent Luke Russert for (merely) asking whether House Democratic leadership would benefit from younger leadership (a widespread belief at the time).  As her remarks indicate, there is no reason to believe that Pelosi is sexist- at least not against women.  She is, beside being a little put off by new media, against anything or anyone that/who challenges her authority (video below, again). 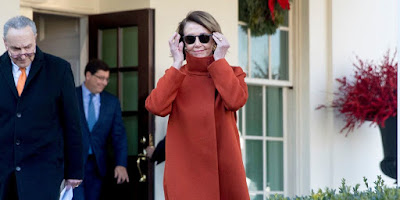 House criticism of the GOP's border detention bill, supported by Pelosi and Senate Minority Leader Schumer, was led by Alexandria Ocasio-Cortez, Rashida Tlaib, and Ayanna (don't call me Elvis) Presley,  They are youthful, they are women, and they are "of color" (or "colored," as it once was put in the less-tolerant precincts). Those are the Representatives who, with Judiciary Committee chairperson Nadler and Ways and Means Committee chairperson Neal dancing to P:elosi's tune, are currently presenting any challenge whatsoever to the Speaker.

And so it is they whom Pelosi, unhelpfully, struck out against.  Criticism of a Democrat for allegedly being insensitive to minorities- especially, though not only, in the age of Trump- is the stuff of what sometimes makes the Democratic Party or the left look foolish.