Could Happen To Any "D"

On November 13, during her diplomatic visit to France, Vice-President Harris spent $580 at "legendary culinary emporium" E. Dehillerin in Paris. The far-right Free Beacon, citing purchase of a $375 pot, charged  “The vice-presidential shopping spree came as Americans stateside suffer from the worst inflation in three decades, putting strain on both consumers and small businesses.” According to the Republican Party twitter account,  "while Americans are struggling to pay more than EVER for the holidays, Kamala Harris is out buying a $375 pot.”

That's pretty rich, considering as of 13 months ago President Trump had

visited his own properties more than 280 times since he took office — hosting summits at his Mar-a-Lago Club in Florida, taking summer breaks at his club in Bedminster, N.J., and pausing international trips to visit his golf resorts in Scotland and Ireland.

These visits brought the president to familiar places, full of friends, family and political supporters.

They also brought his company money, from American taxpayers.

The Washington Post has obtained federal spending records showing that — while Trump was visiting his properties — his company was benefiting from payments from the U.S. government.

The total: at least $2.5 million in taxpayer funds. Much of that spending was triggered by Trump’s travel, or the travel of his family and aides.

By contrast, Harris spent only her own money, and $580 is a little less than $2.5 million.  However, this is not a legitimate defense of Harris:

President Obama was viciously attacked by the right. So, too, has been President Biden and the decades long crusade against the Clintons, culminating in a full court press against Hillary Clinton, is unprecedented in American history. For those such as Nance and others who appear not to have noticed: Hillary Clinton, Bill Clinton, and Joe Biden are white.

There were several effective retorts to this criticism of the Vice President. Unlike most cookware purchased by Americans, little if any of Le Creuset's cookware is built under the auspices of the Butchers of Beijing. Harris spent her own family's money, and there are worst things- a Badgley Mischka wedding dress, or a Glock, for example- to spend hundreds (or even thousands) of dollars on. And then there is Donald Trump, whose primary objective as President was to rip off American taxpayers.

The worst way defense is to invoke race. And for Nance and others who choose to not to notice, of those three public figures depicted below, two are white men and one a white woman. That's not public service while white- aside from Fauci, that's governing while Democratic. 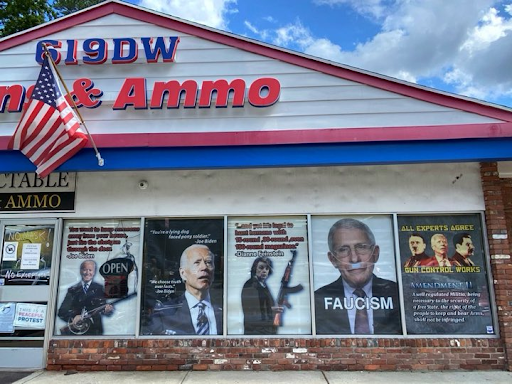