It's a wonder that Joe Biden and "other Democrats" have been elected, for while gasoline prices soar, Politico reports

Some Democrats are seizing on the current crisis to renew their argument that the way to cut America’s dependence on foreign oil is through renewable energy and reduced consumption, not by boosting America’s own production of oil and natural gas, given the existential threat of climate change.

Biden said Tuesday that the current situation should “motivate us to accelerate the transition to clean energy,” a refrain other Democrats have echoed this week. Biden’s failure to enact a sweeping climate and social spending plan last year that he spent months negotiating left many environmentalists demoralized.

You're kidding, aren't you? Few motorists roll into a gas station, sees the cost of gas up 15 cents from the previous week and higher than it ever was while Donald Trump was president, and think  "what we really need now is renewable energy," "thank God for solar energy," "environmentalists have the answer," or "clean energy today!"

Voters see unaffordable gas and they want to know who to blame.  Admittedly, it's necessary to set the record straight by reminding people that the USA was awash with oil in 2020, even 2021, because fewer people than normally were driving. (And the war in eastern Europe has disrupted the market.) But it's not enough. At least this is a start:

Psaki: What additional permits do they need? The leases are there. The permits are there. I don’t think they need an embroidered invitation to drill. That is their oil company. pic.twitter.com/xpWoJsPllv

The press secretary is on the right (actually, left) track. Shelling out their earnings on gas, Americans don't want to hear about the Green New Deal or climate change.  They're looking for someone or something to to hold accountable.

On Thursday, one prominent GOP senator, wary the American people might credit President Biden for cutting off energy supply from Putin's Russia, tweeted "The price of gas increased by 75% since Biden became president *before* Biden blocked oil imports from Russia."

Democrats need to find a counter-narrative, and, assuming they'd like to win more than a few elections in November, it must not be environmentalism because the finger-pointing must not be left to Republicans.

Fortunately, Democrats can assess responsibility while pursing the effort, through legislation and/or executive orders, to rein in fossil fuel interests to combat climate change. One possibility is through breaking up monopolies in the energy industry. Another is suggested by Sam Seder, beginning at 5:42 of the video below: 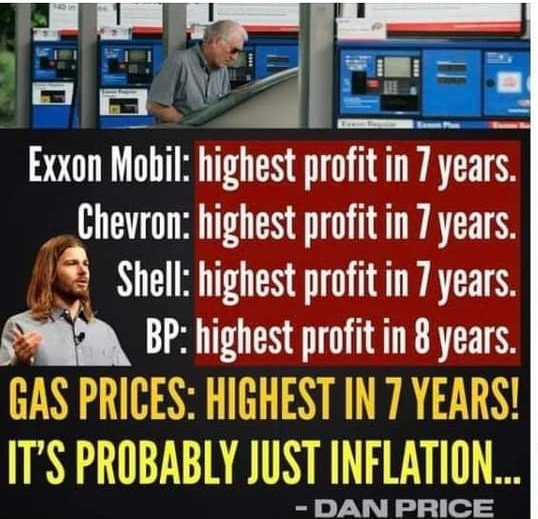