More Disinformation From The Right

It's enlightening, in a way, to peruse the conservative blogosphere. Rush Limbaugh, as you would expect, is not the only instrument of conservative Republicans to make things up.

From climatechangefraud.com, first quoting from an editorial in the Charleston Gazette:

NASA reports that the first half of 2010 was the hottest ever recorded around the world. Nine African nations suffered their worst heat records. Russia hit its highest-ever reading of 111 degrees on July 11 — and Pakistan broiled at 128 degrees on May 26. The first decade of this new century was the warmest on record. It exceeded the 1990s, which exceeded the 1980s, etc.

Good grief. Record warm — and cold — happens. NASA’s records are dubious because the agency’s records go back only 30 years and they have been manipulated by the likes of global warming believers.

With selective quotation- "the first decade of this new century ..... exceeded the 1990s, which exceeded the 1980s, etc.," Climate Change Fraud manages to make it appear that NASA's "records go back only 30 years...." But in its press release dated January 21, 2010, NASA notes

January 2000 to December 2009 was the warmest decade on record. Looking back to 1880, when modern scientific instrumentation became available to monitor temperatures precisely, a clear warming trend is present, although there was a leveling off between the 1940s and 1970s.

What part of "looking back to 1880" does this conservative propagandist not understand?

The World Meterological Organization, in its "Statement on the Status of th Global Climate in 2000" (PDF), assesses the "beginning of instrumental climate records around 1880," and observed

The graph, below, from the website treehugger.com (but evidently originally from NASA), is entitled "Average Global Temperature, 1880-2009":

"Record warm- and cold- happens," climatechangefraud.org reports. True- but we're getting a lot more warm than cold the past three decades. When this coming winter there is snow and cold weather- in winter!- and right wingers, impressed by winter weather, ridicules global warming theory, they won't bother to point out these weather anomalies from the U.S.A. (chart from Climate Progress via Capital Climate via NOAA National Climactic Data Center):

And a similar chart from Capital Climate: 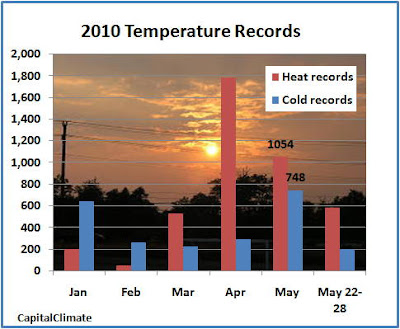 O.K.- those were from only this year. As for the same pattern over the last thirty years, there is this (from the University Corporation for Education Research, ucar.educ.): 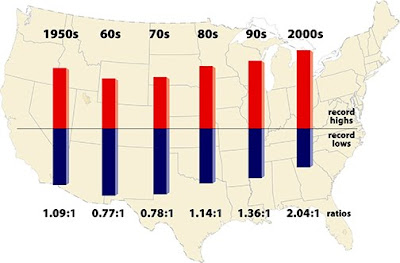 As with health care, the economy, and Social Security, the right refuses with climate change to accept basic premises, choosing fantasy as its alternative reality.

My favorite measure of idiocy and ignorance in America is #WWPSS (What Would Pat Robertson Say). Turns out this crazy, superrich ...