He didn't pay taxes for 10 years!  Now, do I know that that's true?  Well, I'm not certain.  But obviously he can't release those tax returns.  How would it look?  You guys have said his wealth is $250 million.  Not a chance in the world.  It's a lot more than that.  I mean, you do pretty well if you don't pay taxes for 10 years when you're making millions and millions of dollars."

Romney has, at first glance, denied Reid's charge, noting he has "paid taxes every year- and a lot of taxes."

No doubt he has done so- the property taxes on the six homes Romney owns must be enormous, especially because they are hardly shacks in the low-rent districts.   To be fair, the presumptive GOP presidential nominee may have been referring to federal income taxes, though without release of his returns we probably will never know for sure.

As the chart (below) from Citizens for Tax Justice indicates, in 2011 (as in most years) "the share of total taxes paid by each income group is similar to that group's share of income."   In a slap to poor and lower middle class citizens, conservatives exuberantly shout "we are the 53 per cent!"    Forty-seven percent of Americans pay no taxes, they claim; the claim pertains to federal income taxes, they sometimes acknowledge.   But that 53%, generally, includes the lowest 20%, which pay 2.1% of all taxes; the next 20%, which pays 5.3% of all taxes taxes; and a fair chunk of the next 20%, which pay 10.3% of all taxes.     (As a whole, they pay 17.7% of all taxes in the U.S.A. while pulling down 21.7% of the total income; not much of a discrepancy, and not very progressive.)    These are the freeloaders to many Republicans; to the rest of us, they're Americans, most of them hard-working, unable to find a job, or elderly. 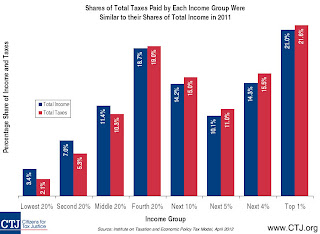 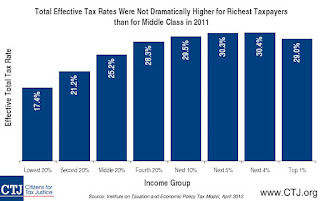 Without disclosure of those tax records, we'll never know for sure but presumably, the former governor probably was honest when implying that he has had a net tax burden every year.   The Alternet's Joshua Holland suggests nine other reasons, arguably each more likely than paying no taxes, for Romney's stubborness.    One such motive may be the disconnect between documents filed with the SEC and, later, with the FEC.

The Boston Globe found that Bain Capital filed with the Securities and Exchange Commission public documents maintaining Romney was the firm's sole stockholder, chairman of the board, chief executive officer, and president from 1999-2002.   Additionally,  "a Massachusetts financial disclosure form Romney filed in 2003 states that he still owned 1000 percent of Bain Capital in 2002.   and Romney's state financial disclosure forms indicate he earned at least $100,00 as a Bain 'executive' in 2001 and 2002, separate from investment earnings."

The two filings, obviously, are contradictory.  But there is not much left of the Federal Election Commission and the former governor (who in the SEC filing maintained that he attended board-related meetings for companies owned by Bain) probably lied to it rather than to the SEC.   If true, that would place Romney front and center at Bain Capital when it was Offshoring Central- and when it acquired $75 million of shares in Stericycle, a large medical waste disposal firm.     David Corn notes in a filing on 11/30/99, Romney is named "as an individual who holds 'voting and dispositive power' with respect to the stock owned by Bain."    And it has not gone unnoticed that one of the activities of Stericycle included the disposal of the, er, products of abortions.

Good luck explaining that one to the base, Governor.      And good luck explaining to the American public why you have at least $20 million in an Individual Retirement Account, when mere mortals are prohibited by law from contributing more than $17,000 per year (employers, $30,000 additional) to their IRA.

But Mitt Romney may not have to explain his IRA, or why he was with Bain when he swore that he wasn't, or paid 5% or 10% of his income in taxes, or the numerous, questionable offshore accounts he set up for himself or others, or his generous contribution to the same Planned Parenthood he has vowed to "get rid of," or any of the other peculiarities of the uber-wealthy.    He will not have to explain anything if he does not release relevant tax returns, and it's going to take a lot more than Harry Reid or 21 Republicans to get him to do it.