You're asking something impossible.  You're asking for liberals to engage in the debate literally.  They're never going to do that.  They're never going to get specific and attach numbers to whatever argument, because it's not about what they're saying.  It's all misdirection.  It's all code.  So when you hear them say the rich aren't paying their fair share, you're saying, "Well, what is?"  They're not thinking of a number.  They're thinking of a way to relate to most people who aren't rich and trying to get them to support them, or to let them know that they're on their side or what have you.  The biggest mistake people make is listening to liberals and wanting to engage them literally.   That's not at all what they're talking about when they say these things.

Limbaugh, himself, of course makes a thrives on rarely being specific, notwithstanding his periodic, brazen displays of racial animosity or bigotry.  If Rush is paying attention, he knows liberals make a fetish of being specific, the tax code being a prime example.    The portion of the Bush-era tax cuts, since extended by President Obama, applicable to incomes above $200,000 (for individuals) and $250,000 (for couples) needs to expire, as is constantly repeated by the left, the center-left, and President Obama.    That would take us back to rates of the Clinton era of job creation, increased prosperity, and a balanced budget, before George W. Bush came along, making an obsession out of income tax cuts, blowing up the budget, and doing his part to help bring about the greatest economic collapse since the Great Depression.

Making $50 million a year, however, Rush never will run for President, let alone be elected to anything.   Mitt Romney, however, will be the GOP standard-bearer this fall and clearly is attempting to run the clock out, to limp across the finish line while offering few details about almost everything.

That is clear on foreign policy, in which Romney criticizes President Obama continuously while offering few, if any, alternatives.   It applies also to trade, which Romney, remarkably, claims Obama isn't pursuing aggressively.   And now, it applies to tax policy.

The presumptive GOP presidential nominee has produced a tax plan with few specifics.     The Tax Policy Center, a collaboration of the Urban Institute and the Brookings Institution, concluded "any revenue-neutral individual income tax change that incorporates the features Governor Romney has proposed would provide large tax cuts to high-income households, and increase the tax burdens on middle- and/or lower-income taxpayers" (report, here).  Steve Benen at maddowblog illustrated this: 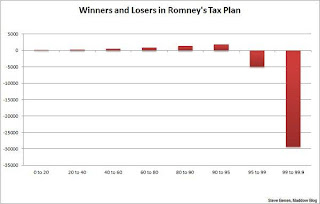 The Romney camp might have trotted out conservative economists to contest the findings of the Tax Policy Center.   Presumably, they couldn't find any.  Or they could have put meat on those bones, specifying what deductions make the plan revenue-neutral, as they claim it would.   Unfortunately, most of those deductions are ones which benefit primarily the middle class and, hey, there is an election coming up.

But that would have been dealing in facts, or at least details, the sort of thing Rush Limbaugh imagines liberals avoid.     Instead, the Romney people rely on dynamic scoring, claiming that the tax cuts would bring rising revenues.     (We have heard that before, in the Reagan and Bush 43 Administrations, and burgeoning deficits ensued.)   They've called it a "liberal study" and "a joke" because, as explained here, "it was co-authored by a former Obama advisor - even though the Tax Policy Center's director, Donald Marron, worked in George W. Bush's White House and the Romney campaign has praised the center's work in the past."

The most entertaining defense, however, was that of the candidate himself, when interviewed by Sean Hannity.   Responding to President Obama's criticism of Romney's plan, the former governor claimed "He has a way of putting out a false statement and then attacking it and making it sound like it's mine which of course it's not. He knows better than that. It really is a matter of a president doing almost anything to try and avoid talking about his own record."     My plan is not my plan. You just can't make up things like that.

Far from setting out to destroy Mitt Romney, the Tax Policy Center bent over backwards to give the Republican every break it could.   Paul Krugman explains

Here’s what they did. They took Romney at his word that he plans to offset his cuts in income tax rates by broadening the base, that is, limiting exemptions and other loopholes. They also assumed, however, that Romney would not be willing to tax dividends and capital gains as ordinary income, since he has made it clear that he opposes any rise in taxes on investment income. As they point out, this leaves a relatively small pool of loopholes to close – big enough that the Romney tax cuts could, in principle, be paid for by base broadening, but not with a lot of room to spare.

The key point is then that even if you do this, the tax cuts Romney gives high-income Americans are bigger than the loopholes he could conceivably close...

This means that even on the most favorable assumption, the Romney plan would give the rich big tax cuts on net – which means that to be revenue-neutral, it must raise taxes on Americans making less than $200,000 a year.

So they’re actually giving Romney every possible benefit of the doubt – and still his plan is a redistribution from the middle class to the rich. In practice it would surely be much worse.

If pressed, the Romney campaign probably would argue that its candidate has been specific about the Affordable Care Act, inasmuch as he has pledged to rescind it.   But while may want to end something the incumbent has done, that's a far cry from making a proposal to reform a health care system any serious person concedes is deeply flawed.     Mitt Romney is a politician resembling Rush Limbaugh's warped view of liberals:   people who want voters "to let them know they're on their side" while managing to be wrong about almost everything.