To the New York media, it's "The Big Apple." To one mob-connected figure, it was "if you can make it here, you can make it anywhere.  It's up to you, New York, New York..."  To cartoonist and illustrator Saul Steinberg, it was a View of the World from 9th Avenue: 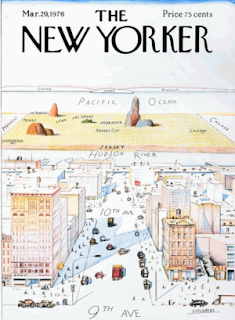 And now for the idea that New York City is all there is to know, or at least the best the world ever has known, we can add  "a veteran police officer" quoted by the New York Post; New York City councilman Peter Vallone; and former New York governor George Pataki.

In the wake of the ruling by federal judge Shira A. Scheindlin  that New York City's stop-and-frisk policy is unconstitutional, the police officer reportedly stated "Welcome to Chicago,"  Speaking to possibly MSNBC's best and most objective host, City Democratic councilman Peter Vallone bragged "We`re the most diverse, the most -- the best trained, most effective police force in the country. If you want to look at a monitor, let`s put one in Chicago, let`s put one in Detroit. "

Then there was former New York Repub governor George Pataki, who clashed with Eugene Robinson on Tuesday's Morning Joe.  Convinced that New York City is, of course, better than Chicago, Pataki maintained

If [Attorney General Eric] Holder and [President Barack] Obama want to investigate a police department, why don’t they look at Chicago, where the civil rights of young African-Americans are being not only taken away, but they’re being murdered in record rates in the South Side of Chicago? The policing there leaves something to be desired when it comes to protecting the constitutional rights of young African-Americans to walk the streets with life, liberty and in the pursuit of happiness.

Neither the President nor the Attorney General was involved in the lawsuit against Bloomberg's policy but it's easier to slam the likes of Barack Obama and Eric Holder than the less professional, more vicious (Chicago mayor) Rahm Emanuel.  But Pataki, wise in not directly attacking Emanuel, is a little ignorant about the Constitution. Referring to"the civil rights of young African-Americans (who) are being murdered in record rates in the south side of Chicago," The ex-governor oozes sensitivity when advocating "the constitutional rights of young African-Americans to walk the streets with life, liberty and in the pursuit of happiness."

In fact, one of America's great founding documents does include "We hold these truths to be self-evident, that all men are created equal, that they are endowed by their Creator with certain unalienable Rights, that among these are Life, Liberty and the pursuit of Happiness."  Except that, of course, this is not the United States Constitution but the Declaration of Independence, which one would have hoped a (former) governor of one of the nation's largest states would be aware of.

Nor did Pataki explain how "the civil rights of young African-Americans are being... taken away."   There is, frankly, no constitutional right to be happy nor even to pursue happiness, to be free from violent crime, nor even to walk the streets.   The decades-long cliche:  my rights end where your nose begins.

The U.S. Constitution does not routinely regulate relationships between individuals. It does, however, regulate the relationship between the government and the people, and Judge Scheindlin found that the stop and frisk policy as constituted violates the 4th Amendment's protection against unreasonable search and seizure and the 14th Amendment's equal protection clause, though she did not order the practice be ended.

97% of violent crimes in this city are committed against minorities.  You go where the crime is if you want to stop the crime. We don’t have unlimited resources where we can flood the streets of Midtown Manhattan with police officers...

It’s easy to not pay attention to the housing projects like they do in Chicago, and let crime go on there. It is a tribute to this mayor and Police Department that we are putting so much of our police emphasis in low-income neighborhoods, in high crime neighborhoods, so that the quality of life, the safety that every one of us as an American should be entitled to feel comfortable in, exists not just on Fifth Avenue and Park Avenue, but exists on 125th Street and Ocean Hill-Brownsville.

I'm overcome by George Pataki's concern about minorities or "young African Americans to walk the streets." But though Pataki himself may count as friends affluent black professionals such as himself, it's unlikely he often has to "walk the streets" with those "young African Americans" he implies he speaks for.   Pataki's residence (photograph below) in Garrison, N.Y., some 56 miles from Manhattan, hardly looks like an urban tenement or even working-class housing and counts Roger Ailes as another of its residents.  It was, as of 2000 (the last year for which I've found figures), over 92% non-hispanic white and less than 3% black.

Please lecture us some more about the mean streets of urban America, Governor.  It's a New York thing, evidently. 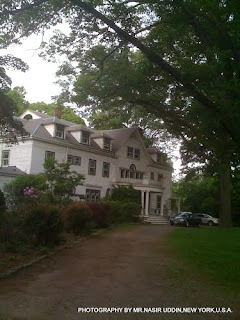