Not Cooling, And Experts Knew It


Controversy has erupted over the hiring by The New York Times of Bret Stephens as one of its op-ed columnists. The conservative Stephens had been deputy editorial page editor of the Wall Street Journal and the choice of climate change as his opening column, in which he expressed skepticism of skeptics of climate change skeptics, only exacerbated the discontent.

Stephens now is posing as open-minded and objective. There was a time, however, when he stated

Well, in the 1970s we were supposed to believe in global cooling. In the 1980s it was the nuclear winter. In the 1990s it was mad cow disease. Global warming was the flavor of the decade. I can't wait to see what the next scare's going to be.

Similarly,  I read this morning a Newsweek article from the 1970s talking about global cooling. And it said the science is clear, it is overwhelming, we are in a major cooling period and it’s going to cause enormous problems worldwide. … Now, the data proved to be not backing up that theory. So then all the advocates of global cooling suddenly shifted to global warming.

As Fact Check revealed, the author of the article later asserted he "must admit mea culpa" because "in retrospect, I was over-enthusiastic in parts of my Newsweek article."

However, the notion that scientists generally or climate scientists specifically believed as late as the 1970s that global warming was the wave of the future is the myth that will not die.

The author of the fact check analysis, Gary Levitan noted

scientists had not yet determined the relative impacts of two factors on climate: greenhouse gases, such as carbon dioxide, and aerosols, such as those that are spewed out by volcanic eruptions and burning of forests. Some papers in the early part of the decade predicted that increasing aerosol emissions could lower temperatures enough to trigger an ice age, but these conclusions were disputed. By the late 1970s, research had established that the warming associated with greenhouse gases was dominant over the cooling effect of aerosols.

As author and professional skeptic Brian Dunning points out, "during the 1970s, nations worldwide took drastic steps to reduce acid rain and sulfate emissions." Even as they did, there

was a 2008 study in the Bulletin of the American Meteorological Society titled The Myth of the 1970s Global Cooling Scientific Consensus. It was a survey of climate articles published between 1965 and 1979 in the scientific literature, rather than of those published in the mass media. The authors found that 10% of the articles did indeed predict cooling, 28% found the data insufficient to make a prediction either way, and 62% predicted global warming. In other words, 90% of climate articles in scientific journals in the 1970s did not conclude the Earth was cooling. 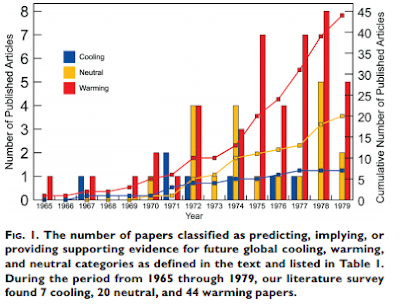 The process by which millions of Americans came to believe that 1970s experts had predicted global warming characterizes the conservative means of formulating political opinions.. Although scientists roundly rejected the idea of cooling, the popular media was full of it (figuratively and literally).   Newsweek, Time, and an episode of Leonard Nimoy's "In Search Of" series were among the mass media outlets which promoted the theory that the earth was cooling. In a choice between scientific opinion and pop culture, the right will first choose the popular media, and  there will be no second choice. They will go for what they've "heard" every time.

A similar problem exists in the Abortion Hysteria Industry, in which a lot of people continue to insist that women die during abortions or that women develop breast cancer or suffer mental health problems as a result of the procedure. It's a special and particular problem among climate change denialists, but is a hurdle for the left across-the-board in asserting the need for change.