Roy Moore stands a little better than a 50-50 chance of being elected senator from Alabama, after which he will not be removed. One indication of the former is that Donald Trump, who demands to be seen as a "winner," gave a shout-out to the former  judge Tuesday. 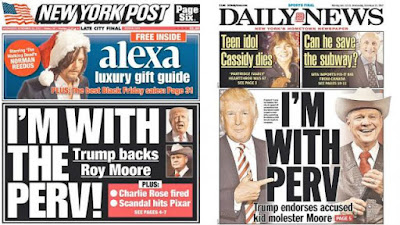 The reason, obviously, that Moore may be elected is white evangelicals.  Not only does the vast majority support the Republican, but a recent poll found that 37% found they are "more likely" to vote for him following recent revelations about sexual predation.

That is astounding, or at least seems counter-intuitive.  However, Nate Silver, straining as ever to be objective and neutral, "would encourage some caution about interpreting this" and tweets "for most voters, 'more likely to support after allegations' means 'I'm a Moore supporter & don't believe the allegations' and not " I approve of the conduct the allegations allege.'"

Most polling to determine the prevalence of evangelicals- or of any other religious group, including atheist and "none of the above"- relies on self-identification. That makes it a little less startling that, as Baylor University history professor Thomas S. Kidd notes

Around 53 percent of Trump supporting evangelicals marked that they seldom/never went to church.  It's hard to square that with "Bebbington's quadriennial:" a high regard for  the Bible, emphasis on the saving effects of the crucifixion, and the belief that people must be converted and faith inform one's daily actions.

Those beliefs are secondary because the political is now religious.  The right to an abortion is a litmus test for many of these self-styled evangelicals. Support it  and they won't trust you on any issue and will doubt your commitment to Christianity; oppose it and they'll follow you anywhere, even if you're an accused child predator.

Whatever the historical roots of "evangelical," Kidd recognizes, it now has

become more of a rough political and ethnic signifier. What today’s “evangelicals” have in common is not so much Biblicism or action for the gospel, but a self-defined sense of religiosity and a dogged commitment to Republican politics. And being white.

Kidd observes "Other than political allegiances, we don't know much about what the term evangelical means any more." That was more than enough to get Donald Trump elected, and probably will be enough to get a disgraced ex-judge with curious sexual mores elected to the U.S. Senate.