“The correct term is ‘illegal alien,’ ” Hans von Spakovsky wrote in the conservative magazine National Review. “The politically correct term ‘undocumented immigrant’ … is a made-up term used by progressive groups and media sources to extinguish the line between legal immigrants and illegal aliens.”

“I’m a human being,” said Maria Sotomayor, who immigrated from Ecuador and is now deputy director of the Pennsylvania Immigration and Citizenship Coalition, an advocacy group. “A human being is not a crime.”

Nobel Peace Prize winner Elie Wiesel famously said that no human can be illegal. Pope Francis refers to “migrants” and “refugees” and “our brothers and sisters.” And last year, the Library of Congress dropped “illegal alien” from its subject headings — angering conservative lawmakers who claimed the library had bowed to liberal pressure.

I hate to argue with Elie Wiesel and anyone named "Sotomayor" (no indication whether Maria is related to that other Sotomayor), but they're roughly as wrong as von Spakovsky.

Admittedly, no human being can be illegal- or legal, for that matter.  However, the term "illegal immigrant" describes someone who has immigrated illegally. (If this sounds easy to understand, kindly inform Wiesel and Sotomayor.) Moreover, in this phrase, "illegal" is an adjective modifying "immigrant"- not person.

Thus, an individual may be an "illegal immigrant" just as she may be a "lousy carpenter" or "good carpenter," which is not an evaluation of her value as a person, but only as a carpenter. Similarly, she may be an "inadequate pastor," one who is insufficiently effective as head of a church, though possibly a great woman.  Or she may be a great mentor, impressive at mentoring, or a great athlete or great mother or conversely, a bad athlete or mother.

There may be insidious motives to the word "alien." It is intended either to offend as many people as possible, to rile critics, or both. Additionally, when I hear the word "alien," I can't help but think- and probably am expected to think- of this sort of creature: 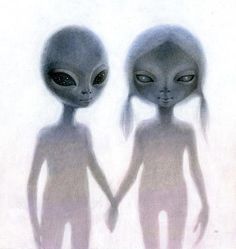 So go ahead, activists. "Illegal immigrant" isn't as sexy as "alien" or "undocumented," but at least it's accurate.