It doesn't matter with whom Donald Trump is sleeping (or rather, not sleeping). It is important to determine who paid Stormy Daniels, why, and where the money originated, to shut her up in October, 2016 about her affair with candidate Trump.

Alas, that story is being underreported. Not so the kerfuffle about the allegations in "Fire and Fury" that the President has been sexually involved with Ambassador to the United Nations Nikki Haley.

Those accusations come from individuals attempting to determine who author Michael Wolff was referring to when two weeks ago on "Real Time," he suggested to Bill Maher (video below) that the President was currently having an affair, but "I don't have the blue dress."  He added "It's toward the end of the book. You just have to... you'll know it. Now that I've told you, when you hit the paragraph, you'll say 'bingo.'"

Wolff, the author of the incendiary but error-specked book “Fire and Fury: Inside the Trump White House,” was on set with Brzezinski on MSNBC’s “Morning Joe” on Thursday for a conversation that initially focused on the ongoing Russia investigation.

The conversation quickly turned to remarks Wolff made last week on HBO’s “Real Time With Bill Maher,” where Wolff claimed to know that Trump was having an affair but could not responsibly say with whom. Instead, Wolff pointed viewers to a passage located somewhere at “the end of the book” that would single out Trump’s mistress.

Readers quickly identified a passage in which Wolff wrote that Haley “had become a particular focus of Trump’s attention, and he of hers” and another in which he wrote “that [Haley], with requisite submission, could be his heir apparent.” Haley, in an interview with POLITICO, called Wolff’s insinuation “disgusting” and “highly offensive.”

But Wolff insisted, much to the agitation of Brzezinski and others on the “Morning Joe” set, that he had not made any suggestion about Haley.

“I found it puzzling that she would deny something she was not accused of,” he said. “I didn't infer anything about Nikki Haley. What I inferred was that the president is — is that many of the people around the president believe he is still involved with various women.”

The host was not amused and

After some back and forth, Brzezinski suggested to Wolff that he “might be having a fun time playing a little game dancing around this, but you're slurring a woman. It's disgraceful.” Wolff once again insisted he had not made any insinuation about Haley, to which Brzezinski replied, “Come on. Are you kidding? You're on the set of ‘Morning Joe.’ We don't BS here.”

Wolff then asked Brzezinski to read to him the remarks he had made in which he supposedly had accused Haley of having an affair with the president. The demand, which Brzezinski refused, was apparently the last straw.

“If you don’t get it, if you don’t get what we’re talking about, I’m sorry. This is awkward. You’re here on the set with us, but we're done,” she said. “Michael Wolff, thank you. We're going to go to break now. Bye, everyone. We'll be right back.”

Wolff should not find it puzzling that Haley has flashed so much anger about a relationship she denies  she is in. However, you the reader are now given the opportunity to view both of Wolff's interviews, the first on "Real Time" and the second on "Morning Joe," an opportunity Brzezinski denied her viewers.

And with good reason.  However slimy and profit-driven Wolff is, he never stated that he was referring to the former South Carolina governor.

He did say that it was toward the end of the book. However, that was probably a mistake because this passage was only in the middle (chapter 17) of the book: 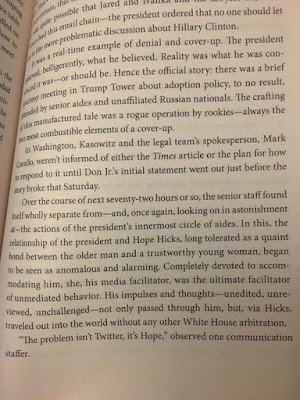 Wolff probably faced a conundrum once speculation focused on Nikki Haley. He could have said definitively that it is not Nikki Haley, but then would have all but revealed the name. He could admit he made an error in stating that the relevant passage was not necessarily toward the end of the book, and it would have become clear whom he was writing about.With so many critics arguing that Wolff's tome is not credible, it is odd that no one has suggested he was wrong in his recollection of the location of the pertinent passage.

It is very unlikely (not impossible) that Nikki Haley, formerly a governor and state legislator in South Carolina, would indulge the carnal desires of a misogynistic, 71-year old narcissistic, lying braggart.

Haley, with a professional life aside from Donald J. Trump, would have more to lose than to gain. Not so every woman in the Administration, including another whose professional career largely depends on Donald Trump and whose last name begins with the same initial.

Trump may be having no affair at all. Yet, insofar as he may be, Mika Brzezinski and other individuals who have so feverishly rushed to the defense of Nikki Haley should consider that Michael Wolff never was referring to the country's Ambassador to the United Nations.