Not So Fond Of Them, Either

There is a thing (from "The Other 98%") going around reminding us that Donald Trump has defended spousal abusers and neo-Nazis while denigrating Muslims, women, Haitians, Nigerians, Puerto Ricans, Mexican immigrants, African nations, and black athletes protesting racial disparities in the criminal justice system. 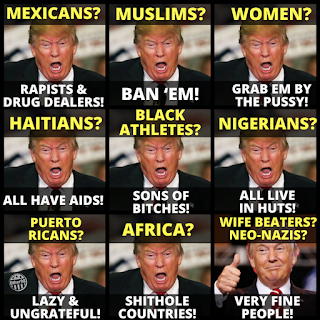 Very good, but not inclusive. Grump's other prejudice is more subtle because the President cleverly disguises his hatred of the group by constantly praising them- with a paternalistic touch. In his speech Friday to the Conservative Political Action Conference he stated

Yet, Trump also took a crack at the nation's most famous war veteran, despite- more likely, because- he is suffering from a brain tumor and thus would find it difficult to defend himself. He added

It would have been out of character had he used the Arizona senator's name, because that would have required a backbone, more glaringly absent in Trump's case than in most conservatives. The New York Daily News has reported that Meghan

McCain revealed that Trump had called her up and promised to stop taking shots at her 81-year-old father.

"I don't believe he would go there again," she told Politico's Women Rule podcast. "I don't think at this point in his administration it would be beneficial to him in any way."

It's not shocking to believe that Donald Trump would lie, or that he would tell the last person he speaks to whatever the individual wanted to hear.  It's also unsurprising that he would slam a war veteran.

That's not only because Trump infamously said- on his way to being the choice of GOP voters as its nominee for President of their country-  that John McCain is "not a war hero. He’s a war hero because he was captured. I like people who weren’t captured." Joe Scarborough noted that "McCain "could have stayed home like Donald Trump. He could have chased models." Grump's popularity took no hit whatsoever.

He could have stayed home and chased models, like Donald Trump, who once remarked "It's amazing, I can’t even believe it. I’ve been so lucky in terms of that whole world, it is a dangerous world out there. It’s like Vietnam, sort of. It is my personal Vietnam. I feel like a great and very brave solider."  Man slut and combat soldier: six and one-half dozen of the other.

There are two differences between Donald Trump's distaste for almost everyone but himself (and Ivanka) and that for soldiers.  The President pretends to admire enlisted men and women- and he's rarely called out for the contempt he has for them.