"It could have been worse" tweeted Will Bunch Thursday above this famous photograph: 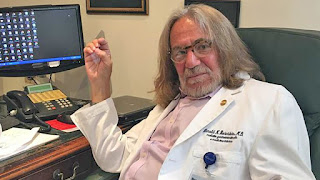 It may be unwise to disagree with a journalist wise enough to have recently written a column entitled 'Race Realism': How Teve Bannon, Cambridge Analytica modernized white supremacy to elect Trump.

However, it would have been far better if  President Grump instead had nominated Dr. Harold Bornstein to be the next director of the Veterans Administration.

You remember Dr. Bornstein, who in August of 2016 wrote that candidate Trump would "be the healthiest individual ever elected to the presidency." Unless Bornstein doubles as a presidential historian or has personally evaluated each president in his roughly 240 years of life, he did not write the letter, which is almost certain.

Harold Bornstein knows something about President Trump. It may pertain to Trump's physical health, his mental health, or his past, but he knows something.  He wrote a bizarre letter and is arguably slightly bizarre himself and would have faced an extremely difficult confirmation process.  In the unlikely event he would have been approved, the undying loyalty of a doctor who claimed "I think I picked up his kind of language and then just interpreted it to my own" would be suspect.

Rather, the President cleverly nominated a member of  the United States armed forces,  a rear admiral who has demonstrated the loyalty we typically witness from a military officer, a physician to presidents Bush and Obama who was promoted by President Trump.  Like Colin Powell in the Bush Administration and John Kelly in this administration, there is every reason to expect Dr. Ronny Jackson to be a loyal soldier, perhaps even a cheerleader for his Commander-in-Chief (the latter his status if Jackson does not resign from the Navy prior to taking on his new position).

Unlike someone such as Bornstein, Jackson can be depended upon and is at least a reasonably good bet to be confirmed. But as with Bornstein, Jackson knows a thing or two.   Additionally, Trump probably views Dr. Jackson as President Lyndon B. Johnson viewed FBI director J. Edgar Hoover, of whom he once stated "it's probably better to have him inside the tent pissing out, than outside the tent pissing in."

In January, Bornstein had given Trump a glowing assessment- and not only of his physical health, as unlikely as that is. Additionally, CNN noted

"I have absolutely no concerns about his cognitive ability," Jackson said, noting that Trump scored at 30 out of 30 on the Montreal Cognitive Assessment test.

Trump regularly "speaks his mind," Jackson said, and the doctor "found no reason whatsoever to think that the President has any issues whatsoever with his thought process."

The Montreal Cognitive Assessment Test is not only a well-known tool but is available online for everyone, including the President, to practice before he takes it. Golly gee wilickers! Donald Trump himself had requested beforehand that he be given such a test!

There are other reasons President Trump tapped Dr. Jackson for this important position. (Loyalty is not one of them, unless "Jackson" is short for "Kushner" or "Trump.")  As a good Republican, Trump wants to privatize everything in sight, very likely including the Veterans Administration, which would become more politically viable when Jackson proves incapable of administering a government agency. Further, the President appears in awe of everything military, including parades, and yearns to be seen as military himself.

Certainly, Will Bunch did not mean to suggest that Dr. Jackson was a good choice or even that Dr. Bornstein was in the running. But Donald Trump was sufficiently canny to get elected President, and his motive(s) for choosing Dr. Jackson is more than a little suspicious.