Each plays a role in the Stormy Daniels/Stephanie Clifford-Donald J. Trump story. But this isn't about the corrupt businessman and the pornographic star. It pertains to President Trump's reaction to Sarah Huckabee Sanders' remark about the affair, and how that provides insight into Trump's surprise victory in November of 2016.

James Comey and Mrs. Sanders have something in common, other than belonging to the GOP.  Mediaite (and with different words, everybody) reports

According to CNN’s Abby Phillip (citing reporting from Jim Acosta), Trump believes that Sanders essentially breathed life into the Stormy Daniels controversy with her Wednesday remarks.

“According to this source, Sarah Sanders’ comments were essentially putting the Stormy Daniels storyline on steroids yesterday,” Phillip said.

Sanders, in the Wednesday briefing, said “the president has denied the allegations against him. And again, this case has already been won in arbitration.”

Other than being confusing and possibly inaccurate (not unusual or counte-productive in the Trump presidency), there is nothing wrong with this statement. On the contrary, Sanders essentially repeated a great Trump theme: I'm a winner.  She contended the President a) has denied the allegations; and b) won. Case closed; let's move on.

But Trump, with magnificent political instincts, is upset with Sanders. Not, as far as we know, because of what she said but because she said anything, hence giving the public an opportunity to focus on the matter. If nothing else, it resurrected the issue from the political coffin.

And that's not good. Sometimes it matters less what the facts (in this case, contested) are than that an item is in the public consciousness.

Hillary Clinton would probably be president if FBI Director James Comey had not sent a letter to Congress on Oct. 28. The letter, which said the FBI had “learned of the existence of emails that appear to be pertinent to the investigation” into the private email server that Clinton used as secretary of state, upended the news cycle and soon halved Clinton’s lead in the polls, imperiling her position in the Electoral College.

The letter isn’t the only reason that Clinton lost. It does not excuse every decision the Clinton campaign made. Other factors may have played a larger role in her defeat, and it’s up to Democrats to examine those as they choose their strategy for 2018 and 2020.

But the effect of those factors — say, Clinton’s decision to give paid speeches to investment banks, or her messaging on pocket-book issues, or the role that her gender played in the campaign — is hard to measure. The impact of Comey’s letter is comparatively easy to quantify, by contrast. At a maximum, it might have shifted the race by 3 or 4 percentage points toward Donald Trump, swinging Michigan, Pennsylvania, Wisconsin and Florida to him, perhaps along with North Carolina and Arizona. At a minimum, its impact might have been only a percentage point or so. Still, because Clinton lost Michigan, Pennsylvania and Wisconsin by less than 1 point, the letter was probably enough to change the outcome of the Electoral College. 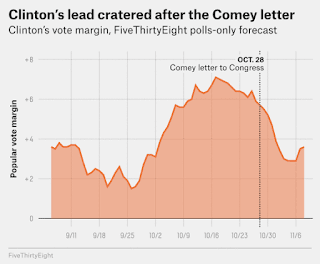 It is highly unlikely, as Silver suggests, that Comey's letter of October 28 did not move at least one additional percent of voters into Trump's column.

Yet, it's likely also that the Director's letter of November 6, 2016- largely exonerating the Democratic nominee- also helped Trump.

That is what Donald Trump appears to believe. And his instinct, a sense of where people are at any particular time, has proven quite sound.