Donald Trump hasn't won yet, may not yet win, and shouldn't win, because there is only one way he squirms out of the Trump Shutdown successfully declaring victory. 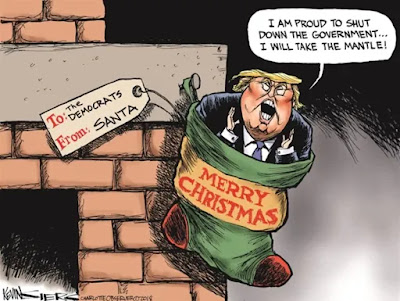 After President Trump on Tuesday signaled support for short-term funding for the government without money for his beloved wall, conservative author and political commentator Michelle Malkin complained on "Fox and Friends"

Well, I'm not going to sugarcoat it and I'm not going to spin it. I wish I could but this was a cave, a blink, and all you have to do is look at- you quoted it, Steve- the exact, precise words that President Trump used.

Malkin was only one of several GOP talking heads who would not have forgiven if the President and the GOP House not recklessly chosen to shut down the federal government over the border wall.

Whether funding is increased or reduced for other border security measures and whether the wall will deter illegal immigration is secondary. They are determined to beat the Democratic Party by getting funding for construction. Therefore, on Thursday Trump reversed course, the House fell in line, and the Trump Shutdown ensued.

Mulvaney put the onus on Democrats, saying the White House is now offering to open the government for less than the $5 billion in wall funding Trump had demanded. Democrats say the wall is immoral and would be ineffective, and they are instead offering to keep the border-security funding at the current $1.3 billion, with money going to fencing and other security measures, but not for a wall.

“We moved off of the 5. We hope they move up from their 1.3,” Mulvaney said during an appearance on “Fox News Sunday.”

Mulvaney refused to offer specifics, but a Democratic aide said the White House offer was for $2.1 billion for border security, including new fencing, plus an additional $400 million fund for other Trump immigration priorities....

Despite near-unanimous opposition to the wall, Democrats have said they are willing to negotiate on funding for other border-security measures. And the administration’s recent shift in focus from a concrete wall to a fence-like barrier made of steel slats offered a slight glimmer of hope for room to compromise.

Malkin, Rush Limbaugh, Laura Ingraham, and their ilk are demanding, in Homeland Security Nielsen's lingo, "wall."  President Trump promised he'd be "proud" to shut down the government over the wall and Fox News' Doocy stated “If there’s not a shutdown, he’s going to look like a loser."

But if Trump gets any money for something he can call a "wall," he will brag that he broke the Democrats, and that includes his "artistically designed steel slats."

A compromise with Republicans is impossible. He will get wall-like money and declare victory. Or he will not get wall money, the right-wing talk show will erupt, and the part will be riven.

"Do we succumb to tyranny of talk radio hosts?” asked outgoing Tennessee Republican senator Bob Corker.  We do, if Democrats succumb to the lure of a "compromise" spun by Trumpists as a victory.