In his own passive-aggressive manner, Robert Mueller on Wednesday said he believes that President Trump committed obstruction of justice. It would be "unconstitutional," the Special Counsel contended, to charge the President while in office with a federal crime and thus charging him was "not an option we could consider." Therefore, Mueller explained, " if we had had confidence that the president clearly did not commit a crime, we would have said so. We did not, however, make a determination as to whether the president did commit a crime."

It was sufficiently clear that Mueller had outed a criminal that Trump was panicked that he had anything to do with the Russian effort to install him as President:

Russia, Russia, Russia! That’s all you heard at the beginning of this Witch Hunt Hoax...And now Russia has disappeared because I had nothing to do with Russia helping me to get elected. It was a crime that didn’t exist. So now the Dems and their partner, the Fake News Media,.....
— Donald J. Trump (@realDonaldTrump) May 30, 2019

Vladimir Putin begs to disagree. Famously, he was asked at the Helsinki summit last July, with Trump standing next to him, "President Putin, did you want President Trump to win the election and did you direct any of your officials to help him do that?"

When the Russian President said "yes," it was widely interpreted that he wanted President Trump to win the election.

However, Putin was asked a two-part question:

a) did you want President Trump to win the election?
b) did you direct any of your officials to help him do that?

Putin did not answer "yes." Feeling particularly invulnerable, He answered "yes, I did. Yes, I did," which suggested that he directed officials to help Trump win the election.

In a bizarre twist, no one has asked the Russkie whether these officials acted independently or in concert with Trump campaign officials, though the implication was the latter.

So we know Ronna R. McDaniel is lying when she tweets, as she did Sunday, "Despite Democrats promising evidence of collusion, @realDonaldTrump was totally cleared.The American people want the collusion delusion to end.  She's lying about the American people wanting the investigation (whatever their opinion on impeachment) to end; and lying about Donald Trump being "totally cleared." He was not only totally cleared, Mueller did everything but say "guilty! guilty! guilty!"

McDaniel probably doesn't care that people realize she is making things up because President Trump barely cares, and lies promiscuously, by tweet, on the White House lawn, and elsewhere. Instead, her major concern is that Donald Trump doesn't hear people calling her by her previous name: Ronna Romney McDaniel. 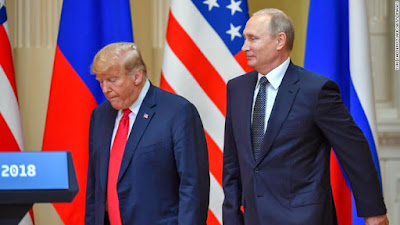