As the video indicates, Bash asked the freshman senator

For a leader even of the Republican variety, there are only two possible answers: a) yes, him too; or b) no, and neither did President Obama. Ernst gave neither, and when her response was a string of words signifying only avoidance and timidity, Bash followed up with a question ending in "is the President exhibiting failed leadership?"

.... of course, the pushback we got from the Democrats after the President did shut down travel from some of those hotspots, it was an extremely difficult environment to operate and we know different today than we did at the start spread of the virus and we should continually learn from those efforts and make sure we are doing the right thing.

Hours before the President announced major restrictions (except for American citizens, holder of green cards, and a few others) to travel from China, three major USA-based airlines announced on their own that they would suspend flights between this country and the world's largest totalitarian regime. The American government did not end passenger flights particularly late nor particularly early compared to other governments.

And that pushback from "the Democrats?"  There was a grand total of two, both US Representatives (neither a presidential candidate) who criticized Trump's action.

Moreover, as The Intercept reported on April 20, the first indexed case of Covid-19 in at least 13 states and territories has been traced to Italy. Further

In the six weeks prior to the European travel bans, the U.S. was exposed to a massive amount of travelers from a highly infected region. During that time, there were almost no checks in international airports for passengers coming from Europe, as American authorities focused their screening efforts on China travelers. The China travel restrictions were mostly cosmetic anyway — the Chinese government banned flights from the Hubei region on January 23 and was sharply reducing its cases through harsh lockdowns and quarantines.

The Trump administration appears to have considered — and rejected — an early European travel ban in January. The Washington Post reported that Matthew Pottinger, the deputy national security adviser, had proposed a travel ban on affected European countries in late January, which was supported by health officials but was rebuffed by Trump and Treasury Secretary Steven Mnuchin. As Trump faces increased criticism for a period of calamitous early inaction, he has sought to focus the blame on China, and on Saturday he published a tweet trying to discredit a New York Times story on the role of European travel in New York’s epidemic.

(Note: This does not exonerate Beijing, the regime most responsible for SARS-CoV-2.)

As cases of Covid-19 surged in Tulsa, this is how President Trump continually learned and made sure he was doing the right thing fewer than three weeks ago: 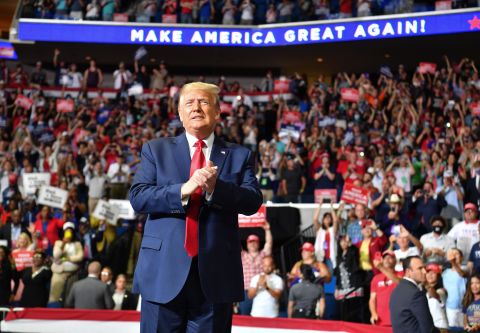 Covid-19 has become a growth industry in Oklahoma. Cases had not been rising in South Dakota, a (lack of) trend the President's visit- with few masks donned and little social distancing, as in Tulsa-F on July 4 to Mount Rushmore aimed to reverse. This is the only sense in which there is any validity to Joni Ernst's remarks. Donald Trump is in fact "stepping forward," striving to send the numbers of those infected to dizzying new heights.

McEnany: "We Broke It, You Fix It"

Kayleigh McEnany, President Trump's last press secretary, has been spinning her disinformation as a commentator for Fox News for the la...