The Publicity Hound And Her Apologists

Though justifiably bold in criticizing three female senators, Will Bunch could have offered them an award for naivete.

So I guess they don't "object" much to Sinema blocking voting rights for Americans, or somehow this is lower on their radar screen https://t.co/oVC7Nu7KW8


This foolish letter was signed by Senators Susan Collins (R-ME.), Jeanne Shaheen (D-NH), and Lisa Murkowski (R-AK). It is short, so you won't  have to go to the link:

The Times has published four separate pieces analyzing the style and dress of our colleague Senator Kyrsten Sinema. We cannot imagine The Times printing similar pieces on the fashion choices of any of our male colleagues.

As Senator Sinema recently said about the commentary on her fashion: “I wear what I want because I like it. It’s not a news story, and it’s no one’s business.” We couldn’t agree more.

Senator Sinema is a serious, hardworking member of the Senate who contributes a great deal to the policy deliberations before us. Your repeated focus on how she dresses, rather than what she says and does, is demeaning, sexist and inappropriate.

spent her Sunday sipping sangria in a pink newsboy cap and a ring that says “Fuck Off.” The Arizona Democrat got someone to take a photo of her, ring proudly displayed in the foreground. Then, she posted the image to her Instagram stories.

Sinema’s outfit, which also included oversized fuchsia glasses and gigantic earrings containing a charm of what appears to be a skull and butterfly, is right in line with her sartorial M.O. The former Congresswoman and first-term senator has long been the flashiest dresser in the Capitol, and during the pandemic, her wardrobe has gotten even weirder.* She’s worn several highlighter-hued wigs on the Senate floor to hide her grown-out dye job as she stayed home from the salon. (According to her spokesperson, the wigs were a reminder to constituents to practice COVID-19 precautions.) In February, she wore a pink sweater emblazoned with the phrase “Dangerous Creature,” a nod to a line from one of romance novelist Lisa Kleypas’ books: “A well-read woman is a dangerous creature.”

And if those are simply a matter of (atrocious) style, but not so when Sinema voted against including a minimum wage mandate in a pandemic relief bill by making "aspectacle of it, popping her hip and giving an exaggerated thumbs-down to the vote counters."

Now she (along with Joe Manchin and 50 GOP senators) adamantly opposes any rule changes which will make voting rights legislation possible. However, that didn't deter her from posting this after the death of John Lewis: 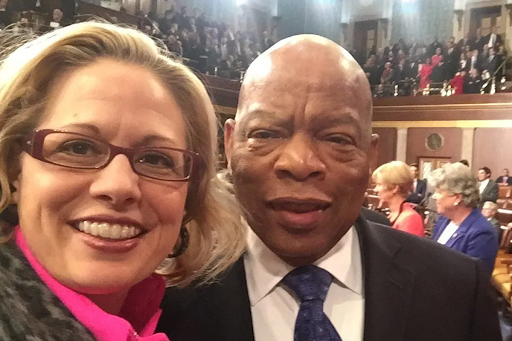