We veer, temporarily or otherwise, from talk of State of the Union and of Rush Limbaugh and of Social Security to talk of.... Glenn Beck.

No, not the anti-Semitic Beck or the Beck who encourages violence but the Glenn Beck who, in his conversational and indirect style, pushes the conservative attack on "class warfare." On Thursday, Beck Beck said on his program on GOP TV

Why would we be pitted against each other? Is it on anything real?

I don't know if you know this, but that person over there, they have it better than you. They have cable. You don't. Get 'em!

Apparently, though, Beck's main thrust is that the enemies of bankers, doctors (doctors?), oil companies, pharmaceutical companies, fast food companies, and the wealthiest 1% are pitting rich against poor.

Pretty slick, Glenn is, positing that populists (i.e., enemies of bankers, oil companies, drug companies, fast food companies, and the very wealthiest people) are on the side of the poor against the rich. The middle class- who comprise the vast majority of Beck's audience- thus are left to choose between the rich and the poor and we know where his audience will line up.

But of course the class warfare being waged- and won- by the wealthy is not against the poor but against everyone else, the poor and the middle class. As the pie graph (below) of 2007 from the Economic Policy Institute reveals, 55.6% of all income growth of the previous three decades went to that top 1% Glenn Beck believes is unfairly castigated. 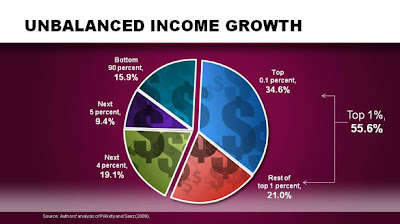 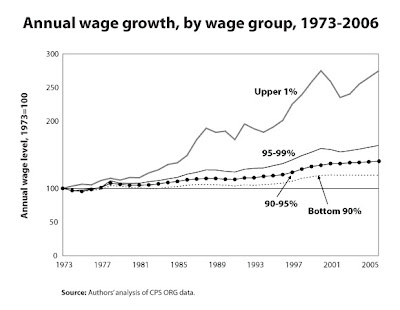 With the preponderance of increased income and wealthy having gone to the top 1% of the population, by 2007 35% of the net worth, and 43% of financial wealth, was held by the top 1%, as illustrated (below) by G. William Domhoff.

The contrast in wealth distribution between 1979 and 2007 is illustrated here by Domhoff:

Even after taxes, the share of the nation's income held by the top 1% more than doubled during this period, from 7.1% to 17.5%, as illustrated by the chart (below) from the Center for Budget and Policy Priorities, from Congressional Budget Office data: 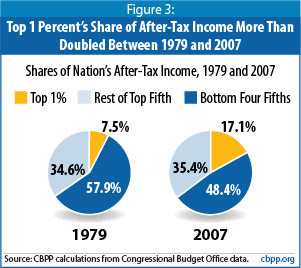 Beck, like most on the right, would have us believe, "there will always be rich and there will always be poor." Yet, the distribution may vary widely over time. Although by 2007 only 65.4% of the nation's wealth was held by the bottom 90% of the population and 34.6% by the top 1%, in 1979 the corresponding figures had been 75.5% and 20.5%. And there really was a Reagan revolution: in merely ten years, in 1989, the numbers for the bottom 90% had declined to 64.3% while the percentage for the top 1% had risen to 35.7%. The war on the middle class was well under way with Ronald Reagan as its General. No wonder, then, that FreedomWorks chairman Dick Armey would be aroused by dreaming "I always thought I'd only get one Ronald Reagan in my lifetime."


In April, 2008 The New York Times reported of the decline of the middle class:

The high point came in the 1970s, just as the United States was beginning to lose its controlling grip on the economies of the non-Communist world. Since then the percentage of people earning at least $20 an hour has eroded in every sector of the economy, falling last year to 18 percent of all hourly workers from 23 percent in 1979 — a gradual unwinding of the post-World War II gains.

That's a significant decline- from 23% to 18%- in the percentage of all hourly workers earning at least $20 an hour and came prior to the recent, devastating recession brought about by Wall Street. Wages, already plummeting in the U.S.A., likely have continued to drop while there are 4.7 workers for every job opening (chart below, also from CBPP, claims 5.0). When Glenn Beck and his ideological allies draw attention to the decline in wages or the share of wealth held by the middle class, they may have standing to whine about class warfare. Not before then. 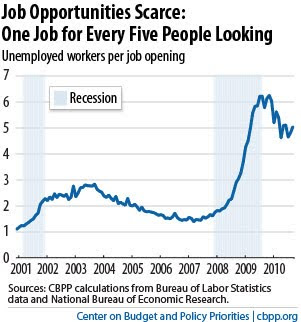 The town hall events held separately for Democratic candidates by CNN are largely one hour unpaid political advertisements. Whatever th...