Audacity, Demonstrated
In the early 1600s, it was "Tom's criticizing Dexter for dubious line calls is a case of the pot calling the kettle black, since Tom's about the worst line judge I've ever see," shortened, thankfully, to "a case of the pot calling the kettle black." Soon afterward, it was "it takes a thief to catch a thief" (actually, pretty ridiculous); later, "you say she's a bad cook? it takes one to know one!", this too thankfully shortened, to "it takes one to know one."
They all fit no one as well as House Majority Leader Eric Cantor who, criticizing Minority Leader Nancy Pelosi for commending the Occupy Wall Street protesters, commented "Believe it or not, some in this town have actually condoned the pitting of Americans against Americans." John Branch, before the action on Wall Street, was prescient (but regrettably his cartoon cannot be posted here without approval).
Fortunately, Steve Stegelin also was right on point: 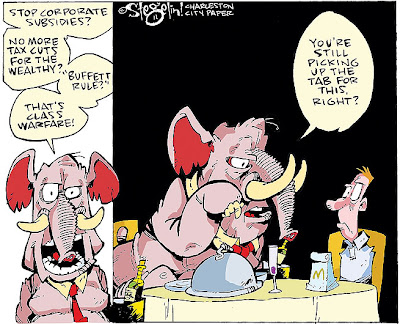 Give Him No Platform

And that's when I knew I was wrong. On March 23 I wrote Broadcast live, these task force briefings are more partisan po...