Tax Tale
Somewhere in an alternate universe, Herman Cain is telling the truth- about something.
First, he's for an electrified fence at the border, bragging to a Tennessee audience "It’s going to be 20 feet high. It’s going to have barbed wire on the top. It’s going to be electrified. And there’s going to be a sign on the other side saying, ‘It will kill you — Warning." Then on Meet The Press, Cain maintains "It's a joke. That's a joke...... I've also said America needs to get a sense of humor. That was a joke, O.K.?"
Meeting the very next day with Maricopa County immigration foe and sheriff Joe Arpaio, Cain told a press conference "I don't like to offend anyone...however, I don't apologize for using a combination of a fence. And it might be electrified -- I'm not walking away from that...." And the next day (evening) at the GOP presidential debate (transcript here) at the Home of Family Values and Christian Commitment, Las Vegas, Nevada, he was asked by host Anderson Cooper "So would you build an entire fence along the entire border, and would you have it be electrified?"
k S
We then learned that Herman Cain supports "a combination of a fence, technology, as well as possibly boots on the ground for some of the more dangerous areas," enforcement of existing federal immigration laws, and authority for states to impose their own restrictions on illegal immigrants. And of course, "to secure border," to differentiate himself from the other candidates who, presumably, want an insecure border.
The one thing missing from his answer was any reference, pro or con, to electrification. So we have heard Herman Cain supporting an electrified fence, opposing an electrified fence, supporting an electrified fence, and avoiding any position on an electrified fence. One could argue that Cain is a confused candidate; but given the free pass given him by Cooper, who didn't press him on the issue, he may be smarter than we give him credit for.
Or just more dishonest. Cain was battered on his 9-9-9 plan by former Pennsylvania senator Rick Santorum, who noted
....reports are now out that 84 percent of Americans would pay more taxes under his plan. That’s the analysis. And it makes sense, because when — when you don’t provide a standard deduction, when you don’t provide anything for low-income individuals, and you have a sales tax and an income tax and, as Michele said, a value-added tax, which is really what his corporate tax is, we’re talking about major increases in taxes on people.
Cain said of Santorum's criticism "That simply is not true. I invite people to look at our analysis, which we make available."
Oh, but it is true. According to the Tax Policy Center, approximately 83.8% of tax filers would pay more total federal tax under 9-9-9 than under the current system. The Center explained
Based on descriptions from the Cain campaign website and Fiscal Associates, the firm that analyzed the proposal for the Cain campaign, we conclude that all three taxes are versions of well-known forms of consumption taxes, although collected in different ways and with a few modifications. The bases of all three taxes are essentially the same as the base of a national sales tax.
A national sales tax can come in two forms: a consumption tax or a value-added tax. Expert analysis indicates Cain's proposal more clearly resembles a value-added tax. Michele Bachmann, identifying herself as "a former federal tax litigation attorney" (that would be for the IRS), surprisingly was accurate when she stated
But Anderson, how do you not have a value-added tax? Because at every level of production you have a profit, and that profit gets taxed, because you produce one portion at one level, and then you take it to the next supplier or vendor at the next level, and you have an exchange. That is a taxable event.
And ultimately, that becomes a value-added tax. It’s a hidden tax. And any time the federal government needs revenue, they dial up the rate and the American people think that it’s — that it is the vendor that creates the tax, but it’s the government that creates the tax.
After Rick Perry (who twice referred to Cain as "brother") bemoaned the fact that Cain's taxes would be added on to existing state sales taxes, Cain talked about apples and oranges, then contended "it is not a value added tax." Were he still talking fruit, Cain would have been right; as a claim about his tax plan, he was not.
The Godfathers Pizza founder maintained also "it does not raise taxes on those that are making the least." Fortunately, a chart from the Tax Policy Center (by way of Jed Lewison at DailyKos) makes clear Herman Cain's intentional deviation from objective reality: 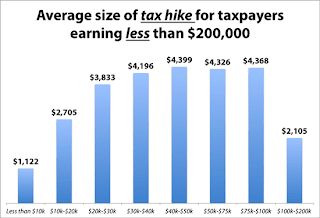 When the second leading GOP presidential candidate is for, against, for, maybe for or against an electrified fence, he merely demonstrates his dishonesty. But when he has to be corrected on tax policy by Michele Bachmann, he is revealed as truly ridiculous.
Share|
at October 19, 2011

Give Him No Platform

And that's when I knew I was wrong. On March 23 I wrote Broadcast live, these task force briefings are more partisan po...