A Surfeit Of Psychiatrists

Joe Klein, carrying the torch for sensible gun control, and Ed Rendell, the trying so hard to be respected by George Will, had a rude awakening, must have been frustrated surrounded by so much nonsense on Sunday's This Week (transcript, here, relevant segment, page 5) with George Stephanopoulos.       (Cokie Roberts, as usual, supplied official Washington Wisdom.)   First, it was George Will claiming

Well, there isn't a human itch in the modern age to commit sociology as soon as this happens and to piggyback various political agendas on a tragedy. I just think we ought to resist that.
Before locating this in some defect, for example, of America society, deal with Norway. That was where a young man on an island, killed 67 teenagers, that was not counting the eight he killed with a bomb in downtown Oslo. There are deranged people in the world.

It's remarkable that someone would ridicule "a human itch in the modern age to commit sociology" in the same breath as he attributes mass murder in two societies as diverse as Norway and the U.S.A. to the existence of "deranged people in the world."   True, Will wasn't "committing sociology"; but he was committing psychology, and without having examined James Holmes.

The other Washington Post contributor, Jennifer Rubin, on the panel also is an expert in diagnosis of mental health in individuals.   She contended

There are very disturbed people out there. And I think the leap to make this into a gun issue rather than a mental health issue, has a limited payoff. I think we saw with the assault gun ban that these instances didn't increase or decrease. Over the last few decades we have had a decrease in crime. But I think we have a mental health epidemic. And we have...

You're right, George. These tend to happen with single men of a certain age, that is also the age at which certain mental illness begins to manifest itself, whether it's schizophrenia, whether it may be depression, it's aggravated in many instances by drugs or alcohol.

Certainly there are very disturbed people "out there," wherever "out there" might be, and Holmes may be one.   (Presumably, "out there" would be the U.S.A. but as a card-carrying conservative, Rubin is reluctant to admit any problem in America.   Except for Americans, whom she believes are disturbed.)   Rubin went on to credit "better policing" and "incarceration" for the gradual decline in crime in the country, no doubt because of an improvement in police techniques and increase in the rate of incarceration.     There have been, however, other factors (such as a drop in cocaine use probably occasioned by a decline of lead in the environment) at play- and the ratio of police officers to population has dropped in recent decades.

But the sleight of hand is most impressive.   Rubin notes that crime is disproportionately committed by men of a certain age, that "at which certain mental illness begins to manifest itself."  Even if accurate, it would be largely irrelevant, given that she is maintaining that is the age at which the disorder manifests itself- which is to say, is reflected in behavior.  It is an impressive circular argument.   She does not- although seems to- argue that schizophrenia causes crime, only that it is reflected in crime.

And that's wise.   The argument that the assault weapons ban, or an allergy to gun control generally, plays a role in crime is simply to suggest that the overall rate of violence would be lower if individuals diagnosed with mental health disorders didn't have access to firearms or individuals weren't permitted to buy an unlimited number of weapons at one time, or in a month.    But when individuals of the left or center are quick to diagnose a particular individual- one whom they didn't know a week ago even existed- they imply that mental illness is the reason for commission of that crime.

It gives pundits wanting to pass off shooting incidents as the work of someone "deranged" or "mentally ill" no pause to consider that crime has been declining while most psychological disorders go untreated, nor that more women are affected while men are more often the offenders.    Nor does Rubin, who cites improved police work and more incarceration, note (charts below from Ezra Klein's Wonkblog) that gun ownership has declined in the U.S.A. over the past half century and gun violence (and killings overall) is greater in states with lax gun laws than in other states.   Inconvenient facts, those. 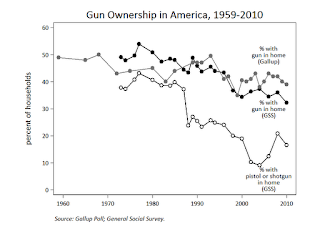 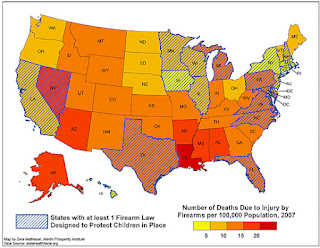