Vague For A Reason


Numerous Republicans already were concerned about the direction of the Romney campaign.   The disreputable NewsCorp CEO Rupert Murdoch on Monday tweeted "Met Romney last week.   Tough O Chicago pols will be hard to beat unless he drops old friends from team and hires some real pros.   Doubtful."    Others piled on after the Romney campaign failed to label early, definitively, and with equanimity the penalty in the health care mandate a tax, rather than a fine.

Thus the opening was provided for other Republicans to know avoidance by the candidate to avoid any specifics about his signature issue, the economy.   Weekly Standard editor William Kristol wrote

This latest mistake is of a piece with the campaign's insular staff and strategy that are slowly squandering an historic opportunity. Mr. Obama is being hurt by an economic recovery that is weakening for the third time in three years. But Mr. Romney hasn't been able to take advantage, and if anything he is losing ground.

The Romney campaign thinks it can play it safe and coast to the White House by saying the economy stinks and it's Mr. Obama's fault. We're on its email list and the main daily message from the campaign is that "Obama isn't working." Thanks, guys, but Americans already know that. What they want to hear from the challenger is some understanding of why the President's policies aren't working and how Mr. Romney's policies will do better.

Then-President George W. Bush invoked a (well-worn) response that is applicable here:  "Bring it on."  Terming it "an excellent piece of work and very much needed," Romney in March stated "I'm very supportive of the Ryan budget plan. It's a bold and exciting effort on his part and on the part of the Republicans and it's very much consistent with what I put out earlier."

Paul Ryan's budget, as the Center for Budget and Policy Priorities explains

would cut the top marginal income tax rate, now 35 percent but scheduled to rise next year to 39.6 percent, to 25 percent.  It would cut the corporate income tax rate from 35 percent to 25 percent and eliminate taxes on the foreign profits of U.S.-based multinationals.  It would eliminate the Alternative Minimum Tax (AMT), designed to ensure that high-income people pay at least a minimum level of tax.And it would eliminate health reform’s increase in the Medicare tax for high-income individuals.

That would blow a hole of $400 billion in the budget in 2015.    Still, Ryan claims his plan would prove to be revenue-neutral in part because the "reforms will grow the economy" (pursuant to discredited supply-side theory) and also "because we close special-interest loopholes."

It would be entertaining to watch the GOP presidential nominee explain which deductions he would close.     The ones with greatest impact, as the table (below, from Kevin Drum with figures from the Tax Policy Center) from the CBPP indicates, are exclusions of employee healthcare benefits and the mortgage interest deduction, and favorable treatment of pension benefits.     Perhaps Romney would like to tackle (or jet-ski through) the deductions for charitable contributions, or on social security or medicare part B benefits, or the earned income tax credit.    What a political winner that would be.

Alternatively, perhaps the former governor would end the tax breaks on dividends, capital gains, inheritance, or offshore income.    That would be a fine way to squander his advantage over Barack Obama in fund-raising among the top 10%.    Romney is as likely to jeopardize that as he is to turn down the nomination he will be handed in Tampa.

So, Mitt, follow the advice offered you by Kristol (and demanded of you by the WSJ) and go into detail.    Forget the vague, sometimes misleading references to Obama's failed economic policy and reject the approach of the party's 1968 nominee, who promised merely "peace with honor," with no explanation.    Then watch as you struggle to win 200 electoral votes in November. 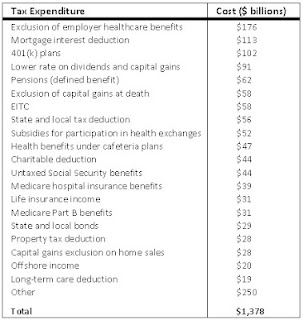