Sidetracked By The Bigotry


The Romney crowd was in high gear Tuesday.    In a morning appearance on GOP TV, John Sununu commented

This guy doesn’t understand how to create jobs. So there is no surprise — there should be because of that statement no surprise on why he failed so miserably over the last four years, in terms of job creation. He has no idea how the American system functions, and we shouldn’t be surprised about that, because he spent his early years in Hawaii smoking something, spent the next set of years in Indonesia, another set of years in Indonesia, and, frankly, when he came to the U.S. he worked as a community organizer, which is a socialized structure, and then got into politics in Chicago.

These are the people who are the backbone of our economy and the president clearly demonstrated that he has absolutely no idea how the American economy functions,  The men and women all over America who have worked hard to build these businesses ... from the ground up -- is how our economy became the envy of the world.  It is the American way, and I wish this president would learn how to be an American.

Later, Sununu clarified, by largely reiterating, his remarks.   Later, he maintained "I had no intention of going back to the American versus non-American issue."  Later, he acknowledged he had "made a mistake... for using those words."

But there would be no apology from Rush Limbaugh, of course.    The previous day (or virtually any day), Rush had remarked

There's no other way to put this. There's no other way to explain this. He was indoctrinated as a child. His father was a communist. His mother was a leftist. He was sent to prep and Ivy League schools where his contempt for the country was reinforced. He moved to Chicago. It was the home of the radical left movement. He hooks up to Ayers and Dohrn and Rashid Khalidi. He learns the ruthlessness of Cook County politics. This is what we have as a president: a radical ideologue, a ruthless politician who despises the country and the way it was founded and the way in which it became great. He hates it.

O.k., o.k., I get it- Republicans want the electorate to believe Barack H. Obama is not one of us.     Done more subtly than by Limbaugh and less awkwardly than by Sununu, it's actually a major cog in a wise strategy by the G.O.P.      But in six months or, hopefully, in four-and-a-half years, the U.S.A. will no longer have a black president and the Gas and Oil Party can go back to its time-tested strategy of implying that a male Democratic presidential candidate is less manly than everyone else, and they can drop the otherness angle.

But it will not drop its signature theme, which is even more dangerous- and as farfetched- as the attack on Obama for allegedly not being of America, or of Christianity.     On Tuesday, Limbaugh complained

And he asked rhetorically

A lot of it is about resentment- conservatives like Limbaugh blasting average Americans because they (we) "are content just to sit there and resent them and have the government take care of them."       Rush continued

The new world is that there is value in being average.   There's valor in not having achieved anything because that makes you a victim... So there's now gonna be a stigma to achievement.  There's gonna be an air of suspicion about it, officially, from the White House down.  And there will be almost an honor or a sense of valor in being average because you fought the good fight, but you lost to a bunch of reprobate cheaters.

The elitism on display is stunning.  The President is promoting "a stigma to achievement," which is contrasted by Limbaugh with being "average."    The "average" individual never achieves anything and is content with complaining.

The elitism and the celebration of the 1%, not surprisingly, go hand-in-hand.      Limbaugh doesn't explain how he came up with the figure of 230 million; perhaps it represents the approximate number of adults in the country.   But according to NYU economist Edward Wolff, as of the end of 2009, 35.5% of the wealth in the nation was held by the top 1%, up from  34.6% before Wall Street titans crashed the economy in 2007.    American University economics professor Robert Lehrman has the figure a little lower, at 33.4%, as the graph(s) below indicate(s): 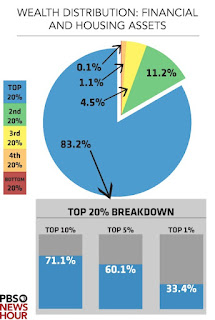 It's critical that this myth is perpetuated by the G.O.P.    On Monday and Tuesday, every Repub Senator voted against cloture on a Democratic bill  which, as the The Huffington Post described it, "would have required any independent group that spends more than $10,000 on campaign ads during an election cycle to file a report identifying any donors who gave $10,000 or more."   The G.O.P. not only wants to hide the identity of its biggest donors but their obscene wealth.   Control of the political process by extraordinarily wealthy individuals (and some interest groups) must not be disclosed.

Well over forty Republican Senators, and none would even approve a vote on whether to require disclosure of big donors.     Denying the public an opportunity to learn who is controlling the American democracy and economy is practically their raison d'etre.  They are not the ever-outrageous Rush Limbaugh, nor the over-the-hill John Sununu, but they, too, are doing their part in the cheerleading squad for the pampered, powerful and privileged.