The president of Request Foods, a processed food company, has written in his company's newsletter "The past 4 years with President Obama, trying to lead and represent us, has been a complete failure."  In his five-paragraph message, Jack DeWitt summarized

What can we do? What am I going to do? I am going to vote on November 6 for new hope and change by voting for Mitt Romney, Paul Ryan and Pete Hoekstra. I hope you will join with me, so we have a better America with less government, less taxes, less regulations, and lower gasoline prices. I believe that voting in these folks would also help lower the number of abortions and enable Request Foods to manage its own health care costs.

He's not alone in his sentiments.  In an eleven-paragraph e-mail to all his employees, David Siegel, founder and CEO of Westgate Resorts (which Gawker.com describes as a "huge national timeshare company and one of the largest resort developers"), sounded a similar alarm.  He wrote (or typed) in a message replete with a sense of entitlement and victimization

The economy doesn't currently pose a threat to your job. What does threaten your job however, is another 4 years of the same Presidential administration. Of course, as your employer, I can't tell you whom to vote for, and I certainly wouldn't interfere with your right to vote for whomever you choose. In fact, I encourage you to vote for whomever you think will serve your interests the best...

So where am I going with all this? It's quite simple. If any new taxes are levied on me, or my company, as our current President plans, I will have no choice but to reduce the size of this company. Rather than grow this company I will be forced to cut back. This means fewer jobs, less benefits and certainly less opportunity for everyone.

So, when you make your decision to vote, ask yourself, which candidate understands the economics of business ownership and who doesn't? Whose policies will endanger your job? Answer those questions and you should know who might be the one capable of protecting and saving your job.

The Koch brothers, as the leading supporters of right-wing and Republican causes, obviously aren't going to be left out.   In a voter information packet mailed to all 45,000 employees of its subsidiary, Georgia-Pacific, Charles and David said in part

If we elect candidates who want to spend hundreds of billions in borrowed money on costly new subsidies for a few favored cronies, put unprecedented regulatory burdens on businesses, prevent or delay important new construction projects, and excessively hinder free trade, then many of our more than 50,000 U.S. employees and contractors may suffer the consequences, including higher gasoline prices, runaway inflation, and other ills.

Enclosed with the letter was a flyer [PDF] listing Koch-endorsed candidates, beginning with Romney. Robertson’s letter explained: “At the request of many employees, we have also provided a list of candidates in your state that have been supported by Koch companies or by KOCHPAC, our employee political action committee.”

Mike Elk of In These Times, which broke the story, added

The packet also included an anti-Obama editorial by Charles Koch [PDF] and a pro-Romney editorial by David Koch [PDF]. The letter went on to say, “We believe any decision about which candidates to support is—as always—yours and yours alone, based on the factors that are most important to you. Second, we do not support candidates based on their political affiliation.”

In the flyer sent to Oregon employees, all 14 Koch-backed state candidates were Republicans.

The effort will be boosted this coming week as the National Federation of Independent Business (which backs Romney as it does other Republicans) is holding a session to train its members to get its employees out to vote.  The effort to intimidate workers is yet another reason to overturn the Supreme Court's Citizens United decision which, Elk states, " "overturned previous FEC laws prohibiting employers from expressing electoral opinions directly to their employees."    And it is taking place in an environment relatively favorable to corporate profits.

The Motley Fool has compared average annual corporate profit growth under the past nineteen presidents and found, using January 2008 profit levels as a starting base, it has increased by 6.8% under Obama, higher than that under 14 of the 18 remaining chief executives.  Using as a starting base the month (January 2009) this president took over (as the site did with the other fellows), Obama's record is far more startling, as the graph below indicates.

history actually shows that the U.S. economy, stock prices and corporate profits have generated stronger growth under Democratic administrations than Republican ones

Likewise, gross domestic product has increased 4.2% each year since 1949 when Democrats run the executive branch, versus 2.6% under Republicans. Even corporate profits show a disparity: S&P 500 GAAP earnings per share climbed a median of 10.5% per year since 1936 during Democratic administrations, besting an 8.9% median advance under Republicans, S&P said.

DeWitt's plea for support of the right candidate is remarkable given that his company, Zach Carter and Jason Cherkis of The Huffington Post explain, "obtained $5.5 million under a federal grant program that Obama's stimulus bill increased by $1 billion," helping it to hire at least 250 additional employees, and has increased markedly its sales during the administration of the Great Socialist.   Township Supervisor Terry Nienhuis of Holland, Michigan, where the money was used for a new water treatment plant to serve a new facility, said "They are growing strong.  They didn't seem to be affected by it at all.  In fact, I think that was one of their strongest growing periods.  Yeah, they're doing well. They are providing very important jobs for people who are having difficulty finding employment."

So perhaps these executives (who built it on their own) have a reason, beyond enthusiasm for the candidate of the 1%, to oppose Barack Obama.    As Business Insider revealed (graphs below) in June, just as wages as a percent of the economy (third graph) and employment as a percentage of the population (second graph) are at an all-time low, corporate profit margins (first graph) are at an all time high.   So maybe DeWitt and others have worked it out rationally, believing that in a Romney administration, jobs will decline, wages will decline, and corporate profits accordingly rise.   Crazy like a fox. 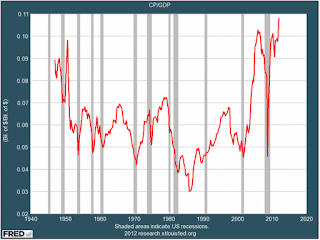 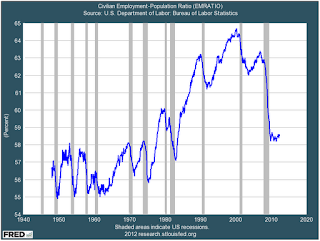 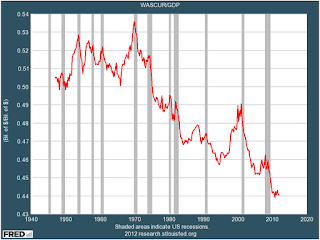