Richard Mourdock (I first typed "Todd Akin" for some reason) has come under a lot of criticism for remarking "I struggled with it myself for a long time, but I came to realize that life is that gift from God. And, I think, even when life begins in that horrible situation of rape, that it is something that God intended to happen."

Arguing that God wants a rape to result in pregnancy is clearly outrageous.  But Mourdock responded to a question, in a debate with Democratic challenger Joe Donnelly, about his view of abortion in the case of rape or incest.   In May, Mourdock made another outrageous statement, and that not in a debate or under pressure to pander to a Fox News audience, but to a liberal audience.    Asked by Chuck Todd on the at least nominally liberal (or at least pro-Obama), Todd happily admitted "I certainly think bipartisanship ought to consist of Democrats coming to the Republican point of view. … If we [win the House, Senate, and White House], bipartisanship means they have to come our way, and if we’re successful in getting the numbers, we’ll work towards that."

That not only says more about the GOP Senate nominee in Indiana, but quite a bit more about today's GOP than a callous, radical remark about abortion or rape.

In April, Huffington Post's Sam Stein recounted the description by Robert Draper in the newly published "Do Not Ask What Good We Do: Inside the U.S. House of Representatives" about a meeting hours after President Obama's inauguration in which

For several hours in the Caucus Room (a high-end D.C. establishment), the book says they plotted out ways to not just win back political power, but to also put the brakes on Obama's legislative platform.

Senate Majority Leader McConnell was not left out, however, declaring two years ago "The single most important thing we want to achieve is for President Obama to be a one-term president."

This has been reflected in the near-unilateral opposition of the GOP to President Obama's initiatives, as displayed in the graph (from Jon Perr) below: 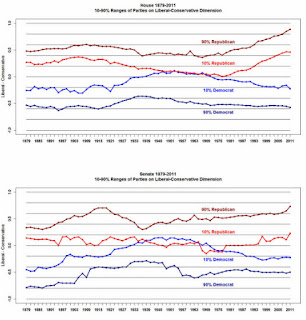 The Senate has followed suit, with filibusters far more common since Barack Obama became President than ever before, as revealed by the graph (from McClatchy) below: 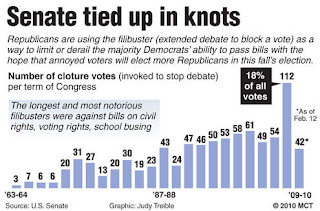 Over the year, the Repub Party has become increasingly radical.  But under this President, as Jonathan Bernstein has argued, it's not about "conservative vs. liberal, conservative vs. moderate, or extreme conservative vs. conservative" but about "radicalism and irresponsible behavior, not ideological extremism."