Are you wondering why it's necessary for big-box stores to open on a national holiday, Thanksgiving Day?  Look in the mirror- because it's your fault.

Or so says a reporter, Marie Panaritis, for The Philadelphia Inquirer.  She writes

In the rush to assign blame for the Christmas shopping frenzy that is taking hold earlier than ever - detractors assailed Target, Toys R Us, and Walmart for planned Thanksgiving openings this year - one must follow the fingertips of American shoppers.

For decades, retailers made a bundle on Black Friday by packing stores with sale goods, filling Thanksgiving Day newspapers with advertisements, and reveling in revenue as customers rolled in the next day en masse.

Then came the Internet. And the old model crumbled like a Jenga tower at a holiday party. Retailers that open their doors at ungodly hours on and after Thanksgiving are competing with an online shopping realm where the doors never close.

Do retailers such as Aeropostale, Banana Republic, Big Lots, CVS, Family Dollar, Gap, Kenneth Cole, Kmart, Old Navy, Sears, Sony, Starbucks, Target, Toys'R'Us, Walgreens and Whole Foods open on Thanksgiving in order to profit at the expense of what otherwise would be a family-focused holiday?  No, they are doing it as a favor to you, the consumer, because

Tons of people trawl the Internet on Thanksgiving as the turkey roasts and the relatives squabble over old beefs. Still others click-and-buy on the days before and after, and all through Christmas, depending on which discounts land in their e-mail.

Rather than let that business vanish forever, brick-and-mortar retailers opt to open earlier - an enticement aimed at damage control.

And, as a pampered and spoiled consumer don't ever, ever consider saving yourself or your family money:

As though all this were not sobering enough for companies that stock, heat, staff, and keep stores open through the holidays, there is yet another enemy:

The very retailers being criticized on moral grounds for opening on once-untouchable days are in this predicament in part because they are being exploited by increasingly wily shoppers.

"Showrooming," as it is known in the industry, is when a customer strolls into a store, inspects a popular product, then compares its price on a smartphone or leaves to order it online. (One edge that online retailers have on price stems from the fact that they do not carry the overhead associated with actual stores.)

"One of the biggest competitors to Walmart right now is Amazon," Kahn said. "These online competitors, there's no question, are changing the way brick-and-mortar retailers do business."

Presumably, Wal-Mart, the leading retailer in the world and the company that sets the standard for American retailing, can barely keep up.   Yet, as Josh Bivens of the Economic Policy Institute notes

And in 2010, as the Walton’s wealth has risen and most other Americans’ wealth declined, it is now the case that the Walton family wealth is as large as the bottom 48.8 million families in the wealth distribution (constituting 41.5 percent of all American families) combined. 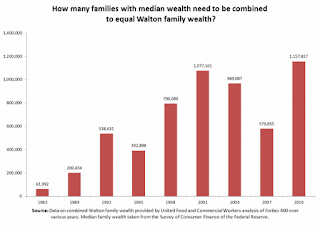 Major retailers can open on a major national holiday.  But they are not going to be open 24 hours, 7 days a week and those greedy, conniving, thrift-conscious consumers still will want to shop before they retire at 11:00 on a Sunday night, or when they awaken early at 5:00 a.m., or at any time the stores are not open. And if they want to spend without going to the trouble of dressing and driving, the Internet still will be available to them, even if stores open at 12:01 a.m. Thursday morning and remain open throughout Black Friday.

One major chain, this year at least, bucked the trend.  P.C. Richard & Son posted on its Facebook page "It is our opinion that retailers who choose to open Thanksgiving Day or Night show no respect for their employees and families, and are in total disrespect of family values in the United States of America."

P.C. Richard, with its 66 stores in Pennsylvania, New Jersey, Connecticut, and (primarily) New York State, is not among the mom 'n pop operations, which face a particularly big challenge. "Small business Saturday" may be soothing to the soul, but its impact will be dwarfed by the inability of these retailers to conduct business on Thanksgiving.

We can be relieved that the guy contemptuous of the 47% has been denied victory by the country's first black president.    But it is still a country of the 1%, aided and abetted by a mainstream media too often operating of, by, and for, corporate interests who go to ever-greater lengths to separate Americans from their money.