New York Times best-selling author Brad Thor , based in Chicago, tells TheBlaze that the Obama campaign may be planning to preemptively announce victory in the presidential election based on early voting numbers in an attempt to “demoralize Mitt Romney supporters.”

Citing a “very solid source” in Chicago, Thor says the Obama campaign is looking to make it appear to voters that they have “this thing sewed up and are less than 24 hours to victory,” according to his source.

Meanwhile, team Obama will also urge voters to get out and vote so they can say they were part of the important 2012 election that resulted in a second term for Obama.

While Thor can’t reveal his source, he told TheBlaze multiple times that the source is very reliable.

The flip side of the coin, the author explained, is that the Obama campaign is counting on the mainstream media to drive home their narrative should they implement this strategy.

It's truly shameful that according to Thor, the Obamites (Obamians?) are urging individuals to vote.  But then, Republicans for a long time have been periodically disdainful and often wary of people exercising the franchise.

The late Paul Weyrich, of whom Focus on the Family founder James Dobson once wrote "Had there been no Paul Weyrich, there would be no conservative movement as we know it," laid out the reasoning.   Weyrich, who co-founded organizations such as the Heritage Foundation and the Moral Majority and founded the extremely influential American Legislative Exchange Council (ALEC), declared (video below, from People for the American Way via Right Wing Watch via YouTube) in August, 1980 "I don't want everybody to vote. Elections are not won by a majority of the people. They never have been from the beginning of our country and they are not now. As a matter of fact, our leverage in the elections quite candidly goes up as the voting populace goes down."

Thor's source may in fact have told him that the Obama campaign will claim it has "this thing sewed up and are less than 24 hours to victory."   It would be odd indeed for a campaign on election day to send its surrogates out to admit its vote is underperforming expectations, which would discourage its supporters who had not yet voted to turn out.   That is particularly well understood by Romney advocates, who have been saturating the media the past few weeks with predictions of victory, despite all evidence to the contrary.

The Romney recognize the importance of the perception of success, presumably remembering

John Ellis is not unlike any other American journalist in wanting to be first with big news. At the helm of Rupert Murdoch's Fox News Network's election night decision team, he achieved the now dubious distinction of being the first to call Florida - and the presidential election - for George W. Bush. The numbers he was working from were not official, but the viewers did not know that. Nor did they know that Ellis was very chummy with Bush - he's his first cousin.

No one might have given Ellis much notice if the election was not still hanging by a chad almost two weeks later - or if he had not bragged to the New Yorker magazine that throughout what's come to be known as 'Indecision 2000' he was constantly on the phone with his cousins George and Florida's Governor 'Jebbie', tipping them off with the latest internal projections on the voting.

The revelation has caused disquiet within the more high-minded of media circles, not least because his decision to call it for 'Dubya' on Fox at 2:16am forced the hand of competing networks. CNN, NBC, ABC and CBS followed the Ellis lead within four minutes, only to be forced into embarrassing retractions less than two hours later. But the fateful decision has proved convenient for Republicans in the ongoing PR war, say media watchers, creating a lasting impression that Bush 'won' the White House - and all the legal wrangling down in Florida is just a case of Democratic 'snippiness'.

'The notion you'd have the cousin of one presidential candidate in a position to call a state, and the election, is unthinkable,' says Tom Rosenstiel, director of the Project for Excellence in Journalism. 'Fox's call - wrong, unnecessary, misguided, foolish - helped create a sense that the election went to Bush, was pulled back, and it's just a matter of time before his President-elect title is restored.

The Obama campaign understands the lengths to which the GOP voting fraud machine will go to snatch victory from the jaws of defeat after November 6 and, after much ado about a lot, its candidate eventually will be inaugurated as scheduled in late January.

I expected a Romney-H. Clinton faceoff in 2008, and confidently predicted before this season that the New York Giants, who at least appear to be well on their way to winning their division of the National Football Conference, would not even make the playoffs.   Nevertheless, at 9:00 Eastern time- before having voted or listened to any news other than sports- I estimate that Mr. Obama will earn 294 electoral votes, which would leave his opponent with 244 electoral votes, which I figured out because my mathematical skill exceeds that of my prognostication (or that of Romney, with his deceptive job and tax plans).

This looks suspiciously like the prediction (map, below) of David Atkins, probably because I "borrowed" it from him.    It seems to me a nice splitting of the difference between what the numbers indicate (300+ for Obama) and the truly awful outcome in which GOP vote rigging and suppression produce a Romney victory.  I believe, however, that Obama's popular vote margin will be very tiny, perhaps .1%, in part because of a Bradley Effect, which evidently did not take place in 2008.   There being a merciful God, the Democrats may win the electoral vote while losing the popular vote, which would produce a bit of second-guessing by a Republican Party dead-set on continuing the electoral college in its current form, and be a fine turnabout (we're not supposed to say 'revenge') for 2000.   But even with a merciful God, such an outcome is unlikely. 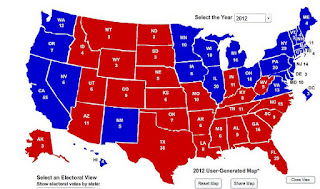 Main Street Liberal will be on hiatus until this (11/10-11/11) weekend.  Please return then.   And by all means, annoy a Republican-vote.