It's not as stupid as it sounds, or reads.  After GOP TV's Neil Cavuto asks "You know, invariably, people ask after tragedies like this, "How could God let this happen?" Mike Huckabee responds:

Well, you know, it's an interesting thing. We ask why there is violence in our schools but we have systematically removed God from our schools. Should we be so surprised that schools would become a place of carnage? Because we've made it a place where we don't want to talk about eternity, life, what responsibility means, accountability -- that we're not just going to have be accountable to the police if they catch us, but one day we stand before, you know, a holy God in judgment. If we don't believe that, then we don't fear that. And so I sometimes, when people say, why did God let it happen. You know, God wasn't armed. He didn't go to the school. But God will be there in the form of a lot people with hugs and with therapy and a whole lot of ways in which I think he will be involved in the aftermath. Maybe we ought to let him in on the front end and we wouldn't have to call him to show up when it's all said and done at the back end.

Huckabee is not stupid, as could be assumed, perhaps, of a former governor of Arkansas.   But he is wrong.  It is hardly likely that schools have "become a place of carnage" when Engel v. Vitale, in which the Supreme Court ruled school-sponsored prayer unconstitutional, was decided in 1962.   It's fairly ridiculous to blame these horrific acts- invariably committed with firearms- on a removal of God from our schools 50 years ago, especially when their incidence is growing.   The degree to which subjecting a young student to a prayer written by a bureaucrat (aren't conservatives usually opposed to bureaucrats?) alters his behavior (and especially his psychological profile) is greatly debatable.

Huckabee isn't stupid.   He didn't, for instance, insist, as do some Christians, that God is always in control.  Rather, he noted "God wasn't armed. He didn't go to the school."

And he especially isn't stupid when he blames liberals and their public schools, who "have made it a place where we don't want to talk about eternity, life, what responsibility means."   As a conservative eager for his cultural views to be affirmed, he advocates discussion about eternity and life and responsibility, which presumably can take the place (in a limited school day) of science, math, and history.

But the problem with the culture which has veered so far from religious faith and a dependence on God does not lie with the public schools, Democrats, liberals, or even the public sector.

When Jesus Christ asserted "My house shall be a house of prayer’ but you have made it a den of robbers" (Luke 19:46, ESV), he didn't have the public school, or the civil authorities, or even the tax collectors in mind. Responsible, however, are not only the crass commercialization of big-box retailers (and the smaller retailers who must follow suit) with their admonishments, amid images of Santa and elves, to shop until we drop.

Sorry, Mike (and fellow conservatives):  it is the entire private sector.   Media Matters for America on Monday noted

Sean Hannity's radio show dabbled in the exact language that his Fox colleagues often criticize as central to the "war on Christmas" when an announcer wished his radio listeners: "Happy holidays from all of us at the Sean Hannity show." Fox News' annual trumped-up "war on Christmas" has largely depended on Fox figures taking offense when the word "holiday" replaces "Christmas" in seasonal greetings.

Nobody at GOP TV has so emphasized the "War on Christmas" as has Bill O'Reilly.   On Thursday, Media Matters found

Bill O'Reilly delivered an eight-minute monologue about the threat that "secular forces" pose to America -- using the nonexistent "war on Christmas" as an example - but Fox News punctuated the segment with an animation telling the audience "Happy Holidays" (image, below).  Fox News has repeatedly attacked people and organizations who use the word "holiday" instead of "Christmas," claiming that they are engaging in a "war on Christmas."

In November, Fox & Friends expressed outrage at the fact that Rhode Island Gov. Lincoln Chafee has used the term "holiday tree" rather than Christmas tree, only to air a segment minutes later about the show's "Holiday wish list."

Mike Huckabee isn't responsible for the hypocrisy at Fox News.   Surely he does know, however, that powerful economic forces are unashamedly profiting from the growing secularism in American society- a secularism the private sector itself has successfully fostered. 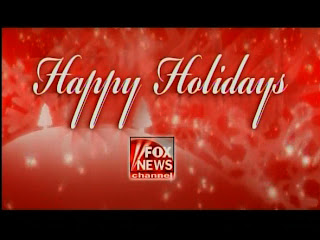 Nonsense, As Far As We Know

The New York Times received a lot of criticism for a recent article which begins President Biden may cast his arrival in the White Hous...