Unless We're Lucky And The Premise Is Faulty


It's not his preference, but Ezra Klein speculates

Talk to smart folks in Washington, and here’s what they think will happen: The final tax deal will raise rates a bit, giving Democrats a win, but not all the way back to 39.6 percent, giving Republicans a win. That won’t raise enough revenue on its own, so it will be combined with some policy to cap tax deductions, perhaps at $25,000 or $50,000, with a substantial phase-in and an exemption for charitable contributions.

The harder question is what Republicans will get on the spending side of the deal. But even that’s not such a mystery. There will be a variety of nips and tucks to Medicare, including more cost-sharing and decreases in provider payments, and the headline Democratic concession is likely to be that the Medicare eligibility age rises from 65 to 67.

The media is on board with a reduction in Medicare benefits (and the Democratic Party with a cut in the program), as demonstrated by Andrea Mitchell's exchange (video, below) with Democratic National Committee chairperson Debbie Wasserman Schultz:

Mitchell, like so many other wealthy, celebrity pundits sees these "popular" programs as something frivolous that Democratic voters are hanging on to out of immature petulance and they just need a stern Daddy to come along and take away their toys for their own good. The fact that these "toys" are equivalent to Andrea Mitchell's yearly dry cleaning bill doesn't change the fact that they represent the entire hand to mouth existence of millions and millions of elderly people who are too sick and too old to go out and become wealthy TV stars.

Sarah Kliff, when this idea of raising the eligibility age (her chart, from Center and Budget Policy Priorities, way below) in return for a slight raise in upper income tax rates had only begun to materialize, explained

The idea has, however, gained a bit more traction since the Affordable Care Act passed. If the Medicare age were raised, the thinking has gone, the 3.3 million 65- and 66-year-olds  would still be guaranteed access to health coverage through the tax subsidies. The lowest-income seniors — those earning less than 133 percent of the federal poverty line – would qualify for Medicaid.

That’s the upside. Health care economists see a number of downsides, too. For one thing, Medicare tends to be a pretty efficient program. Its costs have grown slower than private health insurance plans. The Center for Budget Priorities and Policy estimates that, while the federal government would save $5.7 billion, the rest of the health care system would end up spending $11.4 billion more to provide those same benefits.

Seniors themselves would end up spending $3.7 billion more as the benefits on the exchange would be less robust than those currently covered through Medicare. Employers would end up footing part of the bill, too, continuing to sponsor an additional two years of coverage.

That $2.5 billion in orange on the chart above comes from increasing the premiums that a lot of other people pay for their health insurance coverage. The Kaiser Family Foundation estimates that moving these seniors into the health insurance exchanges would increase premiums there by 3 percent, as the larger insurance pool absorbs a patient population that tends to be older and sicker than its younger counterparts.

Medicare premiums likely would go up too. These seniors would be the more expensive enrollees on the exchange. But when it comes to Medicare, they’re the least expensive patients, the younger population with fewer health care needs than, say, the 90-year-old cohort.

There’s also concern that these seniors might not even have an option should the eligibility age get raised as some states do not plan to expand their Medicaid programs. That could leave any senior who earns less than 133 percent of the federal poverty line — about $15,000 for an individual — without any coverage option at all.

Krugman recognizes the harm in what would (inaccurately) be termed a "compromise," maintaining

First, raising the Medicare age is terrible policy. It would be terrible policy even if the Affordable Care Act were going to be there in full force for 65 and 66 year olds, because it would cost the public $2 for every dollar in federal funds saved. And in case you haven’t noticed, Republican governors are still fighting the ACA tooth and nail; if they block the Medicaid expansion, as some will, lower-income seniors will just be pitched into the abyss.

He asks, rhetorically or otherwise

Second, why on earth would Obama be selling Medicare away to raise top tax rates when he gets a big rate rise on January 1 just by doing nothing? And no, vague promises about closing loopholes won’t do it: a rate rise is the real deal, no questions, and should not be traded away for who knows what.

There are plenty of reasons Obama would be selling Medicare away.  He might be doing so in order to curry favor with, as Jonathan Chait terms them (in an otherwise odd column), the "establishment fiscal scolds," because possessing the approval of the mainstream media is generally important to neo-liberals.  Additionally, the President may believe such a deal would buy him credibility with the Establishment for other initiatives it otherwise might not look kindly upon.

Alternatively, President Obama may be attempting to enhance his reputation as the 'transformative President' characterizing one of his heroes, Ronald(6) Wilson(6) Reagan(6).    Meanwhile, Democratic seekers of congressional seats, themselves unable to gather to themselves the political advantages of transformative, will have to explain to voters why they (and their party) weakened one of America's enormously popular social insurance programs.

Whatever his motive(s), however, Barack Obama must be, in his quiet moments of reflection, contemplating his life after the presidency.   While no one knows for sure where he will land doing whatever he will be doing, one thing is sure:  he won't be hanging out with those too old to write history or too sick to put up much of a fight over the legacy he will have left the old, the sick, and the poor. 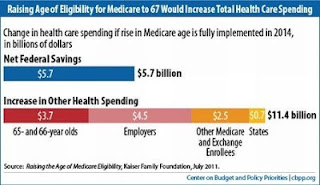