Sinking Along With Labor


You've heard or read some of the numbers.  Data compiled by the CBO demonstrate that over the period 1979 (the first for which such information is available) and 2007, the rich have gotten richer and have left most of the rest of us behind.   The Center for Budget and Policy Priorities noted that the CBO's numbers indicate

- in 2007, the share of after-tax income going to the top 1 percent rose to its highest level- 17.1%- since 1979 while that going to the middle one-fifth of Americans declined to 14.1%, its lowest level during this period.


It wasn't always thus.   The chart below, from Jacob Hacker of Yale University and Paul Pierson of the University of California, Berkeley (posted by Mother Jones' Kevin Drum) depicts what incomes would have been had all income groups seen the same growth rate in 1979-2005 as they had in previous decades. 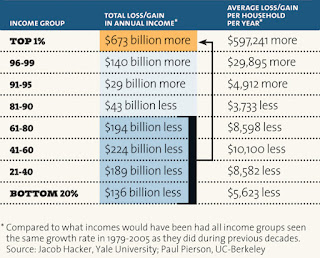 Reasons for the decline of the middle class are many, of course, including automation/computers, "free" trade, offshoring, outsourcing, privatization, federal tax policy, a stagnant minimum wage, and- yes- immigration.   These factors depress wage rates, which would have dropped even further had not productivity among American workers grown 69.1% from 1979 through 2011.

But let us now turn to arguably the most important, the decline of organized labor.    The graph below, from the Center for American Progress Action Fund (whose source CAP indicates here), demonstrates that in the period of 1967-2011 the union membership rate declined in tandem with the middle class share of the national income. 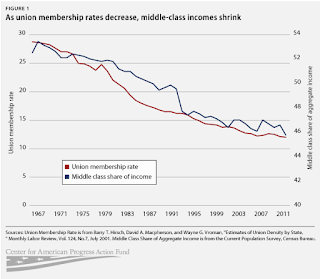 It should not be surprising, therefore, that the middle class in the State of Michigan, with an economy heavily dependent on union workers in the automotive industry, took an even greater hit from 1979 to 2010 than in the nation as a whole.  Lawrence Mishel of the Economic Policy Institute found that the increase in income of the top 5 percent was larger in Michigan than nationally while the income of the typical household actually fell.   He noted "Michigan's middle class had incomes 13 percent above the nation in 1979 but 6 percent below in 2010."

Obviously, unionized employees earn higher wages and receive better benefits because they can bargain collectively and are likely to have at least some protection against arbitrary work rules and termination.   Further, Mishel explains

There are few better explanations for the strong causal relationship on the macro level between the rate of unionization and the strength of the middle class than that of Drum summarizing the 2010 Winner Take All Politics of Hacker and Pierson:

1. In the 60s, at the same time that labor unions begin to decline, liberal money and energy starts to flow strongly toward "postmaterialist" issues: civil rights, feminism, environmentalism, gay rights, etc.  These are the famous "interest groups" that take over the Democratic Party during the subsequent decades.

2. At about the same time, business interests take stock of the country's anti-corporate mood and begin to pool their resources to push for generic pro-business policies in a way they never had before. Conservative think tanks start to press a business-friendly agenda and organizations like the Chamber of Commerce start to fundraise on an unprecedented scale. This level of persistent, organizational energy is something new.

3. Unions, already in decline, are the particular focus of business animus. As they decline, they leave a vacuum. There's no other nationwide organization dedicated to persistently fighting for middle class economic issues and no other nationwide organization that's able to routinely mobilize working class voters to support or oppose specific federal policies. (In both items #2 and #3, note the focus on persistent organizational pressure. This is key.)

4.  With unions in decline and political campaigns becoming ever more expensive, Democrats eventually decide they need to become more business friendly as well. This is a vicious circle: the more unions decline, the more that Democrats turn to corporate funding to survive. There is, in the end, simply no one left who's fighting for middle class economic issues in a sustained and organized way. Conversely, there are lots of extremely well-funded and determined organizations fighting for the interests of corporations and the rich.

The Republican Party has aided and abetted the decline of the labor movement and is always ready to undermine the middle class.   The Democratic Party is better, but with a Democratic President recommending cuts to Social Security and its House leader falling in line, anyone who isn't wealthy better hold on to his or her wallet.

A Liar Or Accessory To Murder