Living Longer In Our Imagination

The Social Security disinformation campaign, by members of the Establishment with jobs they can hold on to till death, continues.   This week, it's Megan McArdle, who only last month (12/14) compared the Social Security trust fund to- no, really- Santa Claus.

Whenever I point out that old-age entitlements are costing us a lot of money, I get pshawed by folks who point out that the Social Security trust fund doesn't even run out of money until 2033.  Leave aside the arguments over whether the Trust Fund makes Social Security safer (short answer: no); Gary King and Samir Soneji argue that even this estimate is too optimistic.  They say that the actuaries at the Social Security Administration are not taking adequate account of improving longevity trends like the decline in smoking.

Short answer, Megan: yes.  In what may have been a coincidence, Kevin Drum a few hours earlier had explained "Treasury bonds are real things: They are promises to repay money at a later date out of the government's cash flow. The federal government has an obligation to pay them back even if it has to raise income taxes to do it."

But I digress. McArdle's current argument is at least legitimate, though she evidently wasn't paying attention when Dean Baker took apart the King/Soneji thesis by noting

Should we be scared by this? Well, the amount is certainly not trivial, but the increase in defense spending associated with the wars in Iraq and Afghanistan came to 1.7 percent of GDP. So, we have dealt with much bigger expenses without too much disruption to the economy. So if King and Soneji's projections prove accurate, Social Security will not exactly be breaking the bank.

However there is a bit more to the story. They only dealt with the impact of improving health on life expectancy. There are other ways in which better health can be expected to affect the finances of the program. For example, the disability portion of the program currently accounts for almost 18 percent of the program's cost. If better health reduced disability rates then this could go a substantial portion of the way toward offsetting the higher costs associated with a longer period of retirement.

The second way in which better health could affect Social Security projections is by allowing people to work later into their life. A substantial portion of retirees are forced to retire due to poor health. If these people were in better health, many workers might put in more years of work before retirement, thereby improving the finances of the program by increasing tax collections.

Better health might also mean slower growth in health care costs. One drain on the Social Security system is the money paid to workers in the form of employer provided health insurance. This money, which has been a rapidly growing share of compensation, is not subject to the Social Security tax. If better health reduces the rate of growth of health care costs, a larger portion of compensation may be subject to the payroll tax, which would also improve the program's finances.

Finally, improved health would likely reduce the cost of other government programs like Medicare. This could means that we will be paying out more money in Social Security to retirees but paying less for their Medicare and Medicaid expenses.

Perhaps longevity of Americans at age 65, which has declined considerably for lesser-educated whites and blacks (charts, below, from chicagomag.com), eventually will increase because of a decline in smoking. But we cannot be certain, especially with so many other factors involved.  But for now, the fiction is continually repeated while the myth of Americans living longer continues to be propagated by an elite out-of-touch with the security needed by less privileged Americans in their old age. 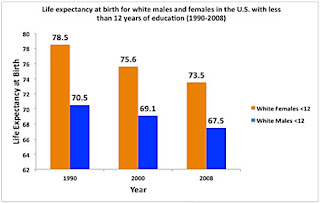 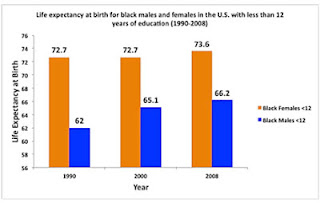