Race And Class In America

The Atlantic's Ta-Nehisi Coates has finished reading Isabel Wilkerson's "phenometal" book, The Warmth of Other Suns, and concludes we need to "get the book. Read it now. Today is too late." Reviewing the work, Coates makes several good points, including ones about neo-liberals, the middle-class values brought to northern citizens by black migrants, and "the bail-out of banks that left the homeowners whom the banks conned underwater."

But Coates also concludes from Wilkerson's work "America does not really want a black middle class.   On a policy level, there is a persistent strain wherein efforts to aid the people are engineered in such a way wherein they help black people a lot less."

But middle class and lower-class individuals of all ethnic backgrounds have not been getting a fair shake for 35-45 years, due partly to the decline of organized labor (graph of union coverage rate in the USA from 1973 to 2011, from the Economic Opportunity Institute, below).   As Harold Meyerson wrote last September

In the early 1950s, one out of three American workers belonged to them, four out of ten in the private sector. Today, only 11.8 percent of American workers are union members; in the private sector, just 6.9 percent. The vanishing act varies by region—in the South, it’s almost total—but proceeds relentlessly everywhere. Since 1983, the number of states in which at least 10 percent of private-sector workers have union contracts has shrunk from 42 to 8....

When unions vanish, ordinary Americans lose their right to bargain collectively for their pay and benefits. Even those who have never bargained collectively will feel the loss. Some years ago, when unions were big enough that their effect on the larger economy could be measured, Princeton economist Henry Farber concluded that the wages of nonunion workers in industries that were 25 percent unionized were 7.5 percent higher than they’d be if their industry were union-free. When unionized companies were common, firms that were nonunion had to mimic the wages and benefits of their unionized counterparts for fear that their employees would leave or, worse, organize. That was certainly the practice at General Electric and other largely nonunion giants. 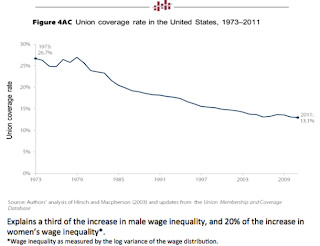 Not surprisingly, nor coincidentally, corporate profits as a share of the gross domestic product are at an all-time low while that of wages and salaries is at an all-time low. In the same vein, the real value of the minimum wage has been steadily declining over the decades as demonstrated by the graph, below, from the National Employment Law Project Analysis of CPI-U.   If the minimum wage ($1.60) of 1968 had kept up with inflation in the 40 years since, it would have been $10.58 in 2012.   Were it raised to $9.80 by July 1, 2014 (as proposed in the Fair Minimum Wage Act introduced in the House and Senate last year, fully 56.1% of the individuals who would benefit are non-Hispanic whites. 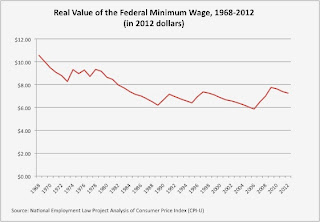 Refuting Coates' thesis that it's only aspiring blacks who have gotten the shiv. Steve M. of No More Mister Nice Guy asks

When was the civil rights era? The 1960s. What has happened to the (overwhelmingly white) middle class since then? Middle-class incomes have been flat since the 1970s. Blacks had to maintain a separate economy until the point when we whites finally conceded, at least in law, that they had a right to some of our pie -- and then they were expected to fight with us for the same amount of pie.

Yes, a lot of whites still don't want blacks to get ahead. But the system hasn't wanted anyone to get ahead for the past forty years, except the 1%. And the aftermath of the 2008 crash makes clear that the 1% want to break the rest of us, eviscerating our social safety net and keeping the unemployment rate high enough that we'll continue to settle for crumbs when we're lucky to land or keep jobs. Yes, whites on average start at a far better position than blacks. But the 1% don't really want any middle class whatsoever.

In the midst- between the first and second paragraphs- the blogger notes "Conservatives say that white ethnic groups faced prejudice, yet managed to make it in America without affirmative action and similar programs. But white ethnics (including my Italian forebears) were able to get their piece of the pie during a period when the pie was getting bigger."

The pie was bigger back then.   In The Betrayal of the American Dream, Donald Bartlett and James Steele last year observed

The last decade alone saw the closing of 14 percent of the nation's factories (56,190 establishments), the sharpest industrial decline in American history.  A record 5.7 million factory workers lost their jobs during this time. This 33 percent decline even exceeded manufacturing job losses during the Great Depression, according to Stephen Ezell, a manufacturing industry analyst. As those jobs have vanished, millions of middle-class Americans- whose income has stagnated or gone down- have struggled.

Those jobs have vanished apart from whether they were held by whites, blacks, Hispanics, Asians, or anyone else.     Jobs may be created in the "new economy."  But all the blather from neo-liberals (including the current President and the last Democratic one) about the need for training for the new economy will bring back, or create, many good jobs for Americans of any ethnic group.

Your blog archives to the right are all weirded out.