In Which The Blogger Offends Conservatives, Obama Supporters, and Clinton Supporters Alike

Seven weeks ago, on January 22, President Obama declared "Today and every day, my Administration continues our efforts to reduce unintended pregnancies, support maternal and child health, and minimize the need for abortion.”

we reaffirm its historic commitment to protect the health and reproductive freedom of women across this country and stand by its guiding principle: that government should not intrude on our most private family matters, and women should be able to make their own choices about their bodies and their health care.

Aye, there's the rub.   There is relatively little states can do to prohibit abortion- to restrict "the health and reproductive freedom of women across this country" or restricting the ability of women "to make their own choices about their bodies and health care."

But there are a thousand different ways states can aggressively discourage women from seeking an abortion.   Recently, Mary Beth Schneider of the Indianapolis Star reports, the Indiana legislature is moving SB 371 in which "women obtaining an abortion-inducing drug would be required to undergo an ultrasound before and after taking the drug." She also would have to schedule an appointment following the abortion for a second ultrasound to confirm the pregnancy was terminated.

The Kansas legislature is considering HR 2253, which is likely to be passed and signed by Governor Brownback, which "would tax abortions, establish life beginning at fertilization, require doctors to say that abortion causes breast cancer and prohibit state employees from performing abortions during the workday."  (The abortion-breast cancer link has been debunked even more thoroughly than has the post-abortion depression story.)

There are 29 states with laws similar to those in Texas, which "require women seeking abortions to hear a doctor's description of sonogram images, wait 24 hours and then return for the procedure. The law allows some exceptions, including cases of rape and incest."  In an op-ed in The New York Times in September, 2011 Dorothy Samuels presented a map (below, from Guttmacher Institute) which, she explained

illustrates the barriers, state by state, facing women needing access to a constitutionally protected medical procedure. States shown in the darkest shade have enacted five of the most harmful restrictions: mandatory waiting periods; demeaning “counseling” sessions lacking a real medical justification; parental consent or notification laws that pose a particular hardship for teenagers from troubled homes, including incest victims; needlessly onerous clinic “safety” rules governing such things as the width of hallways and the amount of storage space for janitorial supplies; and prohibitions on abortion coverage in insurance policies. States in lighter shades have fewer of these restrictions. Twenty-seven states have enacted three or more of these laws, while only 12 states, shown in white, have none.

The graphic traces the total number of a broad range of major abortion restrictions enacted by the states, including the five covered in the map and others, like mandatory ultrasounds. Sixty-one such laws were enacted during just the first eight months of this year — nearly triple the number in all of 2010, and more than double the previous record of 28 set in 1997. Although some of this year’s statutes have already been preliminarily enjoined by courts as unconstitutional, others will be left to stand as constraints on women’s reproductive freedom.

Some of those restrictions apply to doctors, such as included in the bill making its way into law in Kansas, and don't even account for the absence of an abortion provider in 97% of U.S. counties outside of metropolitan areas.   In the majority opinion in Roe v. Wade, Justice Blackmun argued "the attending physician, in consultation with his patient, is free to determine, without regulation by the State, that, in his medical judgment, the patient's pregnancy should be terminated. If that decision is reached, the judgment may be effectuated by an abortion free of interference by the State."  The President, however, while speaking on January 22 on the 40th anniversary of the landmark decision,  invoked"women" three times while cleverly avoiding any reference to physicians or medical professionals generally.

This was no oversight.  At a forum in New Mexico in September, 2010 Obama had stated

Now, with respect to the abortion issue, I actually think — I mean, there are laws both federal, state and constitutional that are in place. And I think that this is an area where I think Bill Clinton had the right formulation a couple of decades ago, which is abortion should be safe, legal, and rare...

But I do think actually that there are a whole host of laws on the books that after a certain period, the interests shift such that you can have some restrictions, for example, on late-term abortions, and appropriately so. So there is in fact a set of rules in place.  Now, people still argue about it and still deeply disagree about it. And that’s part of our — that’s part of our democratic way.

Part of "our democratic way" is the judicial branch of government- including the United States Supreme Court- which is well understood by conservatives, who dedicate themselves to changing the composition of the Court, and of the courts.  In order to circumvent Roe v. Wade, most states accept that abortions must remain legal.  But they aim to make them exceedingly rare by enacting barriers to the expression by women of their reproductive freedom.

President Obama has praised the "safe, legal, and rare" formulation Bill Clinton introduced in 1992 (amidst cheers from naive liberals of the pundit class, who thought it just the way to win over moderates).  To suggest that he is intimidated by the shadow of Bill Clinton would be practicing psychology without a license, a legal, but tenuous, course.

More likely, Obama is loathe to offend conservatives on yet another cultural issue when he could use their cooperation for illegal immigration initiatives and opposition to the Defense of Marriage Act. But Bill Clinton has admitted error in signing the DOMA although, given the generally powerful supporters and powerless opponents of same-sex marriage, the concession is far less bold than it appears. Were he to admit that his pithy "safe, legal, and rare" was too cute by half (as is that cliche itself) and has been exploited to do serious damage to freedom of choice, perhaps President Obama would follow suit and do more than merely pose as a supporter of reproductive freedom. 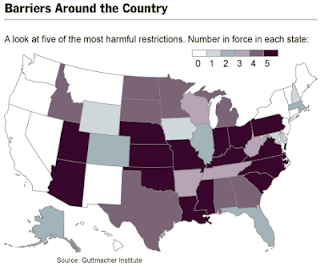