Charles Pierce is angry and not a little bit frustrated and, up to a point, deserves to be.   He's angry about guys like Richard Cohen, David Frum, Andrew Sullivan, and the Colin Powell/Lawrence Wilkerson duo, who are fairly contrite about their enthusiastic support of Iraq War II and dismissal of its opponents.   Now they have recognized the error of their ways and are at least somewhat apologetic but, Peters suggests, it's a little late.

He's particularly frustrated by former President Clinton, who signed the Defense of Marriage Act and now unequivocally has called for its repeal, maintaining "I know now that, even worse than providing an excuse for discrimination, the law is itself discriminatory." Peters argues "Please to be giving me a break. DOMA was discriminatory 17 years ago. It was unconstitutional 17 years ago. It was an offense against human dignity 17 years ago. And Bill Clinton signed it simply to help himself defeat the pathetic candidacy of Robert Dole."

Give me a break:  It matters little whether Bill Clinton has been right or wrong, apologetic or otherwise about same-sex marriage.  His impact on history extends well beyond any effect on who ties the knot with whom.  As President, he signed the Financial Services Modernization Act of 1999, which in part repealed the Depression-era Glass-Steagall Act, which had required the separation of commercial and investment banks.   Nobel Prize-winning economist Joseph Stiglitz explains

Commercial banks are not supposed to be high-risk ventures; they are supposed to manage other people's money very conservatively. It is with this understanding that the government agrees to pick up the tab should they fail. Investment banks, on the other hand, have traditionally managed rich people's money -- people who can take bigger risks in order to get bigger returns. When repeal of Glass-Steagall brought investment and commercial banks together, the investment-bank culture came out on top. There was a demand for the kind of high returns that could be obtained only through high leverage and big risk-taking.

Clinton could not be stopped in his march to deregulate the financial industry. On his way out the door in 2000, he

signed a bill called the Commodities Futures Modernization Act. This law ensured that derivatives could not be regulated, setting the stage for the financial crisis.  Just two months later, on February 5, 2001, Clinton received  $125,000 from Morgan Stanley, in the form of a payment for a speech Clinton gave for the company in New York City.  A few weeks later, Credit Suisse also hired Clinton for a speech, at a $125,000 speaking fee, also in New York.  It turns out, Bill Clinton could make a lot of money, for not very much work...

Over the course of the next ten years after his Presidency, Clinton brought in roughly $8-10 million a year in speaking fees.  In 2004, Clinton got $250,000 from Citigroup and $150,000 from Deutsche Bank.  Goldman paid him $300,000 for two speeches, one in Paris.  As the bubble peaked, in 2006, Clinton got $150,000 paydays each from Citigroup (twice), Lehman Brothers, the Mortgage Bankers Association, and the National Association of Realtors.  In 2007, it was Goldman again, twice, Lehman, Citigroup, and Merrill Lynch.  He didn’t just reap speaking fee cash from the financial services sector – corporate titans like Oracle and outsourcing specialist Cisco paid up, as did many Israel-focused groups, Middle Eastern interests, and universities.

has its roots all the way back in the 1970s and the beginning of the era of deregulation. But there was a kind of inflection point during the five-year period between 1997 and 2003- the late Clinton and/or early Bush administration- when all the rules just went away. You went from a period, a regime where people did at least have some concern about going to jail, to a point where everything is legal, and derivatives couldn't be regulated at all and nobody went to jail for anything. And looking back I would say that this period definitely started under Clinton. You absolutely cannot blame this on George W. Bush.

Not all of it, anyway. Clinton has said "I never had any money until I got out of the White House, you know, but I've done reasonably well since then."   Not only has he not learned the error of his ways, his ways have served his bottom line quite handsomely, and he will not acknowledge that his policy choices have exacerbated the growing gap between the social classes in the country.  In 2007 dollars, the average household income and change in share of income has soared for the top !%, increased modestly for the top 10%, and remained static (for average household income) and declined (for the change in share of income) for the rest of the economy.  These graphs from the Congressional Budget Office tell the story: 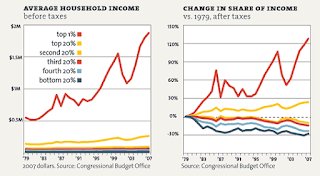 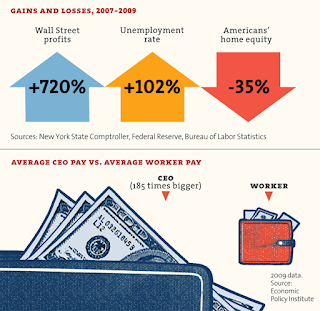 Dave Gilson and Carolyn Perot in Mother Jones write "if the median household income had kept pace with the economy since 1979, it would be nearly $92,000, not $50,000," as they illustrate with this graph:

Oh, but now the former leader of the Free World has stated that he was wrong about marriage between a  man and a woman.  Maybe it's belated.  Or not.   It really doesn't matter a whole lot while the country is divided not between gay and straight, but between the powerful and the powerless.