The Strange Concept Of One Country

The Supreme Court is set to hear arguments on two cases pertaining to same-sex marriage, the Defense of Marriage Act and California's Proposition 8.  Associate Professor of Law Margaret Ryznar at Indiana University, blogging at The Huffington Post, explains

In United States v. Windsor, the Supreme Court will determine the constitutionality of the Defense of Marriage Act (DOMA) signed into law in 1996 by President Clinton. Section 3 of DOMA provides that the word "marriage," as used in any federal law or regulation, means only a union of a man and a woman. This includes laws that govern veterans' benefits, tax adjustments, Social Security, and many other benefits...

A federal district court, having jurisdiction to hear federal constitutional issues, found Proposition 8 to violate the United States Constitution because California had effectively given same-sex couples the right to marry and then taken it away again. The court determined that taking away a right only from a minority group -- which the state had no legitimate reason for doing -- violated the equal protection guarantee in the United States Constitution. The Ninth Circuit Court of Appeals agreed, and the proponents of Proposition 8 sought review by the Supreme Court.

Cultural conservatives are trying to plug up the dam, hoping for an indecisive decision which would enable some states to maintain a prohibition of same-sex marriage.  On GOP News Sunday, both Rand Paul of Kentucky and long-time conservative activist Gary Bauer seemed resigned to decisions which would not maintain federal prohibition of same-sex marriage.  The Senator stated

DOMA is complicated, though, because DOMA does provide protection for the states from the federal government. But, then, you're right, part of it federalizes the issue.

I think there's a chance the court could strike down the federalization part of it. I think the way to fix it is maybe to try to make all of our laws more neutral towards the issue, and, I don't want the government promoting something I don't believe in.

Bauer, who has staunchly advocated traditional marriage and opposed abortion rights since the beginning of time, explained

Yes, Chris, well, look, you don't advance limited government by being an anti-democratic movement that is attempting to take this issue away from the American people. What the brief is asking for and what the groups waiting outside the Supreme Court are asking for, is for unelected judges to deny the people of the states the right to decide what marriage is in their state...

I would prefer every state in the union keep the definition of marriage that's prevailed in Western civilization for a couple thousand years. That doesn't look like that is going to happen.    So, I certainly at this point would prefer the people of the states to make the decision, as they have.

Over at This Week with George Stephanopoulos, the cultural weather vane known as Peggy Noonan maintained

Yeah, Americans don't take it well and don't accept it as a resolution when their black robed masters in Washington decide to put on them what they decide is the right thing. One of the great sins of Roe versus Wade, the abortion decision of 40 years ago, was that it decided everyone has to do it one way, instead of leaving it to the states.

It seems to me it is certainly in line with conservative political thinking, but I think it would be acceptable certainly to liberal thinking, that when there are these gnawing, disagreeing questions going on in America, if you can't solve it here, you can say everybody can solve it down there. Let's state by state make their decision. You will immediately have New York having some of the most liberal decisions on this issue.

You will perhaps have Utah or Arkansas, having less liberal decisions. Work questions out that way as much as possible.

That is a crock.  The Justices in Roe v. Wade did not determine "everyone has to do it one way." States were permitted to enact some, limited, restrictions on abortion in the second trimester and in the third trimester even prohibit it if the life and the health of the woman were protected.  As the map (below) from Wikipedia illustrates, approximately 20 states (yellow) have no waiting periods before an abortion can be obtained, with the others having waiting periods of less than 24 hours (blue), 24 hours or more (red), or waiting periods which currently are enjoined (grey).  There are similar variations among states in ultrasound requirements, parental notification and consent, and fetal homicide laws. 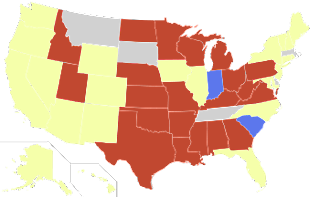 Noonan's disinformation was echoed by Karl Rove on the same panel, when he said "And maybe should not have imposed one national view from the court." That runs counter to Rove's assertion a moment earlier that a GOP presidential candidate in the next cycle might, as Stephanopoulos put it, say "flat out I am for gay marriage."

Admittedly, it is more likely a Repub candidate will state he or she is in favor of same-sex marriage than will oppose tax cuts for billionaires, support closing loopholes which create incentives to move jobs overseas, or support effective restrictions on Wall Street predators. But no one will say he/she is actually for same-sex marriage.  And permitting such a union will be advocated far less than will leaving matters to the individual state, which will become part of the GOP platform.

And interesting, Jim Messina, even the president is not willing to go quite that far yet. I sat down with him two weeks ago and he went farther than he ever had before in saying that gay marriage is a right guaranteed by the constitution, basically said he can't imagine circumstances in a state where a ban could be upheld, but still not going quite that far in enunciating the straight constitutional principle.

Of course, he is not willing to go quite that far yet.  After all, it's not as if we fought a war some 150 years ago- in part over states rights- which, history books claim, the Union won. He may believe gay marriage is a right guaranteed by the constitution, but states should have a right to deny that constitutional right.

The Court ought to decide there is, or there is not, a constitutional right to marry a willing adult, irrespective of gender.  One hundred fifty years after a civil war which decided slavery but apparently little else, center-right politicos like Noonan, Rove, and Obama still can't wrap their arms around the concept of a United States of America.