The news is good.  Politico's Dylan Byers finds that, although it remains the most popular talk show on radio

The Rush Limbaugh Program is considering ending its affiliation agreement with Cumulus Media at the end of this year, a move that would bring about one of the biggest shakeups in talk radio history, a source close to the show tells POLITICO.

Should the move take place, 40 Cumulus-owned radio stations would lose the rights to the most popular talk radio program in the country. In addition, the show might be picked up by competing regional radio stations in Washington, New York, Chicago, Dallas and other major markets.

According to the source, Limbaugh is considering the move because Cumulus CEO Lew Dickey has blamed the company's advertising losses on Limbaugh's controversial remarks about Sandra Fluke, the Georgetown law student. In Feb. 2012, Limbaugh referred to Fluke as "a slut" because she had called on congress to mandate insurance coverage of birth control. The subsequent controversy over those remarks resulted in a significant advertising boycott.

Limbaugh's personal and ignorant attack might have had, of all his rantings, the greatest impact on his ratings (and on his marriage).  But it was among many forays into disinformation.   Tuesday, he stated

California had the highest number of gun murders in 2011, with 1,220.  Sixty-eight percent of all murders in the state in 2011 were gun murders.  That equates to 3.25 murders per 100,000 people.  Well, I'm just saying that 17 of the 20 highest gun murder states are run by Democrats with stringent gun control laws.  See, if you put them in charge of it, what do you get?  You get peace bricks and people who are disarmed and unable to defend themselves.

The information cited by Rush appears to come from the article in The Blaze (a Glenn Beck enterprise) which reads "According to data from the FBI’s uniform crime reports, California had the highest number of gun murders in 2011 with 1,220 — which makes up 68 percent of all murders in the state that year and equates to 3.25 murders per 100,000 people."

Note the sleight-of-hand; both The Blaze and Limbaugh point out that California had the most gun murders (actually, gun deaths), which is unsurprising, given it has by far the largest population of any state.  The Blaze then seamlessly transitions into stating the murder rate in California, thereby implying that the rate is the highest in the nation. And Limbaugh maintains that the "20 highest gun murder states"- again conflating rate with total incidence- are in Democratic states which, he neglects to mention, typically are the largest states.  More people, more deaths; his audience would understand that, were Rush to admit he speaks of numbers, not rates.

The highest rate was not in California, though it was a little above the national average.  The highest in 2011 was, by far, in Louisiana, a state with relatively lax gun laws.  The lowest was, by far, in Hawaii, a state with relatively strict gun laws.  There are, to be sure, variations in this pattern and the correlation between lenient gun control regulations and firearm violence appears to have slightly eroded in 2011.  But it is a pattern, nonetheless; in early 2011, Richard Florida displayed the map (below) and explained 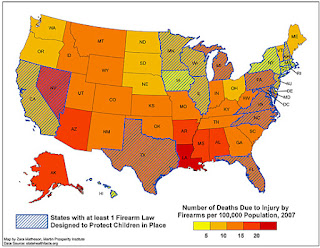 He presented also a chart (below) indicating positive and negative correlation among 21 factors and gun deaths per 100,000 people. 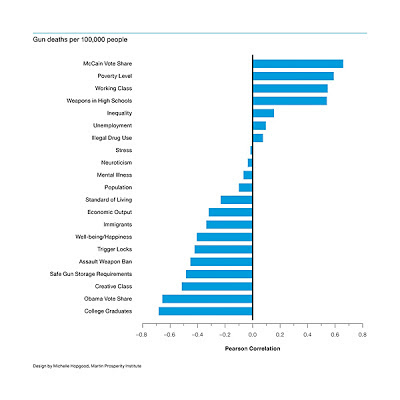 Florida cautions that correlation does not imply causality, and there are innumerable factors which induce a state to suffer a high violent or even non-violent crime rate.  Still, it does suggest that, as usual, Rush Limbaugh can be described as extremist, dishonest, or as Al Franken would have it.

But it is not only irresponsible media figures who mislead their acolytes.  Politico reports

"That's what many of us have argued all along, is that focusing just exclusively on the guns is not the correct approach to this," he said. (South Dakota Republican Senator John) Thune said lawmakers should aim instead at preventing future mass killings by improving mental health programs and increasing the records that state governments send the federal background check system so the checks can do a better job of keeping guns from people who shouldn't have them.