In his weekly radio address delivered on May 4 from the friendly confines of Mexico City, President Obama maintained that "commonsense immigration reform," which he accurately labeled a "compromise,"  would "modernize our legal immigration system so that we’re able to reunite families and attract the highly-skilled entrepreneurs and engineers who will help create good paying jobs and grow our economy."

The immigration reform plan offered by the bipartisan Gang of Eight, the Washington Post reports, "features a a new class of start-up visa for foreign entrepreneurs and would increase significantly the number of H1-B visas (those offered to highly skilled individuals) available to immigrants with advanced degrees, particularly in science and mathematics."   Significantly, for sure: Robert Oak finds the legislation would

increase H-1B Visas from 85,000 to 135,000, they are allowing the limit to go to 180,000 per year.  That is basically all of the jobs created each year in these occupations.  That means every single STEM job would end up being foreigners preferred, forcing U.S. workers out of their careers as the faux pas worker protections are clearly written to be vague and loophole ridden.

Mr. Obama argued, additionally, "Millions of Americans earn a living right now because of the trade between our nations."   The Economic Policy Institute explains

Much recent debate over the challenges globalization poses to American workers has understandably focused on the macroeconomic dangers that an overvalued U.S. dollar and chronic U.S. trade deficit present. The downward pressure on wages imposed by trade flows is exacerbated by the overvalued U.S. dollar; the overvalued dollar makes imports cheaper and exports more expensive, which in turn increases the U.S. trade deficit. However, even if the dollar eventually reaches a sustainable level and trade deficits close, globalization will continue to impose a drag on the wages of most American workers.

This paper presents evidence from a standard trade model on the size of these effects. Bivens (2008) notes further that the impact of global trade on American wages could well double, or even triple; according to some well-pedigreed forecasts, trade in previously non-traded sectors (such as professional services) will expand due to falling communications and information technology costs.

It is important to note that various policy decisions that have governed how the American economy is integrated into the global economy have increased the damage done to American workers. These acts of omission as well as commission include pursuing expanded global integration through trade agreements that carve out protections for corporate investors but not for American workers, and failing to block the overvaluation of the U.S. dollar. It is also important to note that overall national income is likely larger because of globalization and expanded opportunities to trade, and that there has been little to no effort to ensure that these overall national gains are broadly shared. Indeed, national income gains have instead become increasingly concentrated at the top of the income distribution in the same time span examined in this paper.

Obama will acknowledge that fewer manufacturing jobs remain for individuals without a college education.  But obsessed with "free trade"agreements, he will not admit that these jobs, often with good pay and benefits, have diminished partly because of the trade with relatively undeveloped nations he touts. Increasingly, as the chart below from EPI indicates, such trade accounts for the significant decline in career opportunities for males, especially compared to college-educated individuals. 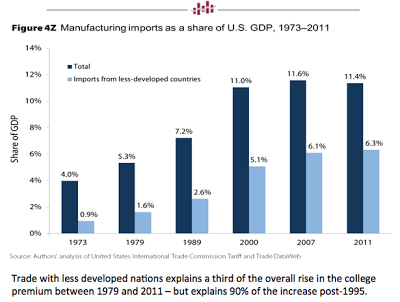 The President has pushed trade agreements throughout his presidency, and clearly many Americans have found employment because of exports to Mexico.  And many Americans have lost jobs because of exports to Mexico (and elsewhere).  Nonetheless, President Obama contended he was in Latin America because of the opportunity it "represents" for "my top priority as President: creating good, middle-class jobs."  In full context, his remarkable claim was expressed as

I’m here because Latin America represents an incredible opportunity for the United States, especially when it comes to my top priority as President: creating good, middle-class jobs.

On Friday, we learned that our businesses created another...

Barack Obama has asserted that his "top priority" as President is "creating good, middle-class jobs." Perhaps his highest priority has been to vanquish Al Qaeda or international terrorism in general; to "bend the cost curve" on health care; or to change the trajectory of long-term debt.  Maybe it has been, as he told the Reno Gazette-Journal's editorial board in early 2008, to be "a transformational President."  Or perhaps he wants nothing as much as to "turn the page on the ugly partisanship in Washington,” as he promised during the 2008 campaign and which has motivated him to seek avidly GOP support for his legislative initiatives. Since before his election in 2008, Obama has been in pursuit of what he describes as a "balanced approach," including cuts to Social Security, Medicare and Medicaid which, investigative historian Eric Zuesse recently noted

was his long-term plan, even though the polls showed widespread opposition to it. This was a matter not of expediency, but of conscience, for him: He needed to find some way to fund both the ongoing Wall Street bailouts, and the massive federal debt that would be caused by the 2008 Wall Street crash and its resulting plunge in federal tax collections. This “balanced approach,” of tax hikes and spending cuts, would be his solution to both problems.

Neither the emphasis on austerity, nor on enhancing national security, nor even on strengthening the health care system would ever be expected to do much to create "good, middle-class jobs." (Austerity destroys them.)  Further, the President will not mention that recovery from the recession has been characterized (as revealed in the table, from the National Employment Law Project, below) by an increase of employment in lower-wage occupations. Nor will he remind the American people that jobs with benefits, adequate pay and pension have been gradually disappearing for the past four decades, a trend exacerbated by the free trade and open border policies he and his predecessors have promoted. So when the President claims as his "top priority" the creation of "good, middle-class jobs," he is not misleading or exaggerating.  He's merely lying.