It's Only Just Begun


Michelle Bernard, as usual, was off-target, remarking Thursday on All In with Chris Hayes

We are supposed to be the greatest democracy in the world, and our democracy is in tatters. We are the laughingstock of the world when a small minority of right-wing zealots can virtually destroy the economic well-being of the country in just a little more than two or three weeks. And they never had a chance of winning.

"Small minority of right-wing zealots" is accurate.  But we've always been a republic, not a democracy and "the laughingstock of the world" is unnecessary hyperbole.  But, more significantly: "they never had a chance of winning?"

So, to summarize through this process, the Republicans, oh, yes, I think we fit them all on here. The Republicans said that they would shutdown the government, or once they shut it down, they would refuse to open the government unless they got each of these things. Of all the things that they wanted, they got nothing. On the other hand, the Democrats had suggested before this whole process that they would please like to talk about the budget. And now, Republicans will go along with that after refusing for six months.

Maddow, unable to point to anything the Democratic Party got, even displayed this nifty, technically accurate, and yet misleading, graphic: 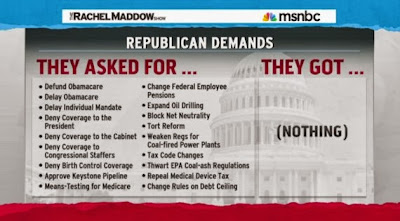 Even Ezra Klein believes the GOP was roundly defeated.  He notes resolution of the shutdown/debt level dispute clearly funds the federal government; knocked the rocky launch of the Affordable Care Act off the front page; and slashed the popularity of the Republican Party while dividing its members.  It did, he nevertheless acknowledges, maintain the spending levels of sequestration.

That is a major victory for the GOP- Grover Norquist contends "Sequester is the big win. It defines the decade."  And there was was one more advantage to the standoff, if only down the road. Standard & Poors estimates, according to TIME Magazine, "the shutdown, which ended with a deal late Wednesday night after 16 days, took $24 billion out of the U.S. economy, and reduced projected fourth-quarter GDP growth from 3 percent to 2.4 percent."

That is a benefit, not a bug, to the individuals desiring to, as Bernard put it, "destroy the economic well-being of the country."  Nor were those individuals limited to the 30-35 Representatives the media would portray as uniquely "tea party republicans."  Until Minority Leader Mitch McConnell, pressured by the business community, agreed to a deal with Majority Leader Harry Reid, most congressional Repubs had been recklessly toying with the nation's economy, afraid to buck the extreme wing of the extreme party.

The shutdown struck a severe blow at public confidence in government, possibly even at the state and local levels.  And despite their proclivity- when there is a GOP president- to increase spending and the size of government, Republicans are not known as the party of government, but the party suspicious and disdainful of it.  Undermining faith in the public sector undermines faith in the Democratic Party and its solutions.  In the shorter term, the President's party is usually blamed for any downturn in the economy.

So hold the champagne, please.  Harry Reid did a masterful job holding together his caucus and negotiating with Mitch McConnell, thereby pulling Barack Obama's fat out of the fire. But as of now, the bestheadline emerging from resolution of the crisis was this from The Boston Globe: 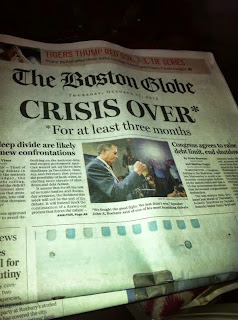