The beauty of listening to Democratic Senators and Representatives close to President Obama is that you get to hear Obama unfiltered.  The President, a master of words and phrases, did not get to the Oval Office by letting people think he did not share their concerns.

The President, of course, was sufficiently wise not to telegraph his intentions to progressives when he opened his news conference Tuesday with

This morning I had a chance to speak with Speaker Boehner. And I told him what I've been saying publicly, that I am happy to talk with him and other Republicans about anything -- not just issues I think are important but also issues that they think are important. But I also told him that having such a conversation, talks, negotiations shouldn't require hanging the threats of a government shutdown or economic chaos over the heads of the American people.

That's the way to do it. Throw a bone to liberals and moderates by vowing not to negotiate with "the threats of a government shutdown or economic chaos over the heads of the American people."  (And for good measure, don't say negotiation won't occur, only that it shouldn't require.a government shutdown.)

Fortunately, we have other, less subtle, Democrats to translate. And so it was that Illinois' Senior Senator and Assistant Democratic Leader Dick Durbin who, Jake Tapper reported Wednesday, remarked

There are conversations under way as to what we will discuss, you know, what we will negotiate over, what things will be on the table. But what we said is – open the government, pay our bills and let's have this honest conversation....The president is trying to establish a standard of conduct that is reasonable and bipartisan and puts everything on the table. I think that's the way to approach it.

Durbin sometimes seems to speak for his bud from Illinois, who on Thursday hosted a meeting with Durbin and colleagues Chuck Schumer and Patty Murray, also members of the leadership.  And with Majority Leader Harry Reid who, following the meeting, stated "The government should be open.... If that happens, we'll negotiate on anything,"

All that awaits is for Republicans to take yes for an answer, which Paul Ryan in his op-ed Monday in The Wall Street Journal encouraged when he wrote "We have an opportunity here to pay down the national debt and jump-start the economy, if we start talking, and talking specifics, now. To break the deadlock, both sides should agree to common-sense reforms of the country's entitlement programs and tax code."

The best way to cut spending, claims Ryan, is to "provide relief from the discretionary spending levels in the Budget Control Act in exchange for structural reforms to entitlement programs." ("Structural reforms to entitlement programs" is more politically correct than "benefit cuts to the earned benefits programs of Social Security and Medicare.") Howie of Down With Tyranny explains 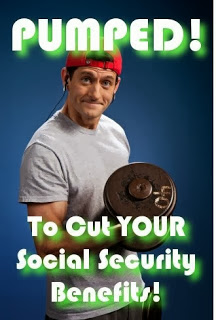 Ryan and his establishment cronies want to jettison the whole Obamacare aspect of their jihad and go after what they and conservative Democrats (New Dems and Blue Dogs and plain old corporate whores) call entitlements and what normal people see as earned benefits, i.e.- Social Security and Medicare. Ryan's whole raison d'être has always been fulfilling the old GOP dream to cut these anyway.

Just because a bunch of mushy no-labels losers are getting together means nothing in itself. And just because Paul Ryan has decided to try to talk sense into his loony Tea Partiers and persuade them that they can make the Democrats do their dirty word for them if they play their cards right, doesn't mean they will listen. They never have before.

But the idea that the President did something wily by refusing to defund Obamacare is pretty funny. If anyone's done anything wily, it's the Republicans who deployed Nixon's madman theory and seem to have persuaded the Democratic establishment that if they just pretend a "deal" to cut Social Security (and God knows what else) isn't a vindication of their shutdown strategy, the crazies will never do it again. I eagerly await the Democratic victory dance.  They really know how to cha-cha-cha.

House Speaker Boehner probably did not orchestrate the good cop, bad cop strategy with Ted Cruz and Mike Lee, but it appears to be playing out that way.  This doesn't mean, of course, that Barack Obama isn't himself "wily."  He has always wanted to undermine Social Security and Medicare through negotiations with the Boehner, though of late he has avoided the term "grand bargain."  Now that Democrats have stood as one against negotiating over "Obamacare," the President may have set Democrats up to accept reductions to earned benefits.   He is, as usual, thinking a couple of steps ahead of everyone.