It Could Be Worse

There is one question it would be wonderful for someone to ask Donald Trump at the Republican debate on Sept. 16:

What is wrong with you?

Seriously. Many of us want to know. It doesn't matter whether it is asked by one of the journalists or a fellow candidate or a heckler in the audience. It just needs to be asked.

Trump is a serial exaggerator, as Seidner notes, who is wont "to call everything about him the best, and to deem everyone who disagrees with him the worst" and  is "a sucker puncher who initiates attacks, a low blow artist, who divides the world into those who agree that he is great and everyone else who will be flattened."  Seidner wants the candidate to

Tell us in his own words. Ask him the question. Directly. What would he say? No doubt, "Nothing's wrong with me. I'm almost perfect." Or, "I'm rich, have a beautiful wife, fabulous children, a great life. What's wrong with you?" But it would be interesting to ask.

Oh sure, Trump is the egomaniacal,  insufferable braggart Seidner paints him as.   But the question of "What's going on inside the mind of someone who...." is a rhetorical question which can almost as easily be asked of the other candidate most Republicans think have a realistic chance of being their party's nominee. Ed O'Keefe of The Washington Post on Friday reported

Jeb Bush was the only announced presidential candidate to participate actively Friday in an event commemorating the Sept. 11, 2001, terrorist attacks -- and he spent a few brief moments noting the work of a certain previous president.

Joining local military veterans and high school students in the town square here, Bush read the names of several dozen people killed in the terrorist attacks at New York's World Trade Center, the Pentagon and in Shanksville, Pa., but only after pausing to reflect on his brother George W. Bush.

"I'm proud of the president of the United States at the time, who unified our country in a way that was desperately needed and created a strategy to keep us safe," Jeb Bush said before reading several pages of names.

John Ellis Bush isn't the only Republican, not by a long shot, to claim President George W. Bush kept the nation "safe" from terrorism. However, other than perhaps Dick Cheney, he is the most prominent one, is running for President, and now has done so at an event honoring the victims of the September 11, 2001 attacks.  The occasion commemorated the event which was the ultimate in endangering the United States- and President Bush's inability and/or unwillingness to do anything to prevent it. John might have noticed that, were he not delusional, dishonest, or crassly political.

Following Bush's decision to launch a war against Iraq while falsely implying Baghdad had something to do with the terrorist attacks, Bush did- briefly- help unify the nation.   Nonetheless, as events in the Mideast unfolded and the region became more unstable, that unity not only evaporated but reversed, leaving a fractured, disillusioned country.

So we can condemn Donald Trump all we wish, even consider him entertainment sideshow as unfortunately the Huffington Post has.  However, as Conor Lynch has observed,

That being said, if we take a look at Trump, beyond all of the controversial remarks from him and his supporters (i.e. “Go back to your country!”) and the despicable attack on immigrants, it becomes quite clear that a president Trump would actually be less dangerous than, say, a president Walker. In fact, just about every other major GOP candidate is probably more threatening to progress than Trump.

That is especially true of Scott Walker, whose campaign appears to be imploding, but also of John Ellis, still a clear and present danger (photo from AP/Jim Cole). 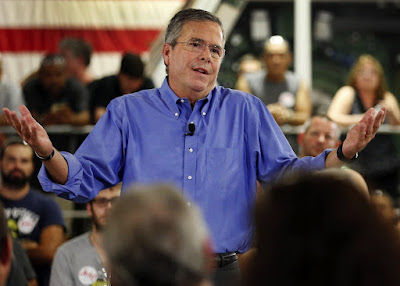 This blog will be on hiatus for a few days. Please come back late Thursday or early Friday.