The afternoon following the last Republican debate, a group from Five Thirty Eight discussed in a chat room the status of the presidential race.  Five-thirty-eight editor-in-chief Nate Silver,  Editor-in-chief Nate Silver, a political writer, and two editors assessed Carly Fiorina's prospects and speculated whether they would buy, sell, or hold the stock of the candidates given what their odds are of gaining the nomination (graph, below) as of 9-17-2015. 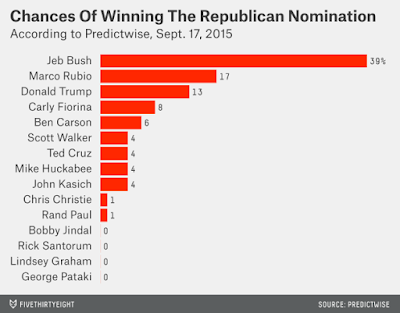 They don't agree across-the-board but there is some sentiment in favor of a "sell" on Bush, Carson, Trump, and Cruz and for a "buy" on Rubio and Christie.

Perhaps more interesting, however, were various insights offered on the candidates.  One of the editors wisely stated of Marco Rubio "I get the strong feeling he is biding his time."  Noting Trump's unwarranted skepticism of vaccination for communicable diseases, Silver maintained Beb Carson "just passed on a couple of opportunities to stick the knife in last night in a way that leads me to wonder whether he's in it to win it." He observed "the thing about Fiorina is it seems a little off to classify her as an insurgent.  If you're the CEO of a major company HP, you're a part of the establishment unless you're a real weirdo " (which Fiorina is not).

One commenter paying attention remarked Fiorina "would be a disaster. Ruined HP along with every other company she worked for. Wait until the mud starts getting slung her way now that she's stepped out of the shadows. It won't be pretty."

Hint of this comes from an article in Politico Magazine by Jeffrey Sonnenfeld, whom Trump referred to in the debate as having condemned Fiorina's tenure at HP and whom Fiorina misleadingly characterized as "a well-known Clintonite."   Sonnefeld explained

In the five years that Fiorina was at Hewlett-Packard, the company lost over half its value. It’s true that many tech companies had trouble during this period of the Internet bubble collapse, some falling in value as much as 27 percent; but HP under Fiorina fell 55 percent. During those years, stocks in companies like Apple and Dell rose. Google went public, and Facebook was launched. The S&P 500 yardstick on major U.S. firms showed only a 7 percent drop. Plenty good was happening in U.S. industry and in technology.

It was Fiorina’s failed leadership that brought her company down. After an unsuccessful attempt to catch up to IBM’s growth in IT services by buying PricewaterhouseCooper’s consulting business (PwC, ironically, ended up going to IBM instead), she abruptly abandoned the strategic goal of expanding IT services and consulting and moved into heavy metal. At a time that devices had become a low margin commodity business, Fiorina bought for $25 billion the dying Compaq computer company, which was composed of other failed businesses. Unsurprisingly, the Compaq deal never generated the profits Fiorina hoped for, and HP’s stock price fell by half. The only stock pop under Fiorina’s reign was the 7 percent jump the moment she was fired following a unanimous board vote. After the firing, HP shuttered or sold virtually all Fiorina had bought.

Sonnefeld paints a picture of a greedy, dishonest executive who revels in personal attacks and remains convinced she always is right despite evidence to the contrary.  As classic inside the Beltway journalist Chris Cillizza writes, "Fiorina got off relatively easily Wednesday night, but if she continues to move up in the polls, you can expect to hear a lot more -- from her opponents and in super PAC ads -- about her record at HP." Nonetheless, no one can be certain whether her ugly business record will alone derail her.

Nonetheless, she would prove a disastrous candidate in a manner well understood by Secretary of State John Kerry and junior California senator Barbara Boxer.

You may remember the falsely named Swift Boat Veterans for Truth, with its disreputable, dishonest, and devastating campaign against 2004 Democratic presidential nominee Kerry.  That was nothing compared to what would hit Carly Fiorina, with the added advantage that criticism of Fiorina would be accurate and would tie her record at Hewlett-Packard with a standard priority of the presidency. Cillizza recalls

In 2010, Fiorina was running surprisingly close to California Sen. Barbara Boxer (D), who was struggling in a strong election cycle for Republicans nationally. Then, Boxer ran this ad focused on Fiorina's time at the helm of HP.

The commercial notes that Fiorina laid off 30,000 workers at HP while feathering her own nest (the ad's narrator says she tripled her salary) and buying a "million-dollar yacht" and "five corporate jets." It went up on TV in the middle of September and effectively ended Fiorina's chances....

PolitiFact has truth-squadded the commercial and found the claims in it to be "mostly true." And with the growing inequity between the haves and the have-nots in the U.S. already established as a front-burner issue in both parties, the attack is likely to be particularly cutting for Fiorina.

Fiorina could possibly be nominated (though it is highly unlikely) because while, according to The New York Times, the manager of her Senate campaign acknowledged the attacks (ad above) harmed her in the general election but they "didn't have any legs at all among G.O.P. primary voters."    (Mrs. Fiorina shouldn't get upset. The reference to "legs" has nothing to do with her appearance.)  But the delicious part, as the Times points out, is

Jim Margolis, the ad maker for the Boxer campaign, is now a senior media adviser to Hillary Rodham Clinton.

"People don't know her yet," Ms. Boxer said in an interview before last week's debate. "What they'll understand pretty quickly is that she is the face of income inequality and Wall Street greed."