Making It Up About Foreign Policy, Marijuana, Herself. Worse Is This.


This could be about foreign policy.   Carly Fiorina vows to build a missile defense system in Poland and to rebuild the Sixth Fleet, which Stars and Stripes reports already is building a land-based missile interceptor site in, as luck would have it, Poland.  She wants to "conduct regular, aggressive military exercises in the Baltic states," which the US military already is doing, and to "send a few thousand more troops into Germany" because there is nothing that says efficient use of tax money better than sending more soldiers into Germany, in imminent danger of conquest by Russia.

Of course, as Gary Legum points out, that wasn't the real message of the candidate who never really means any of it, except for the style, which is supposed to strike fear into the hearts of the bad guys. Salon's Gary Legum (emphasis his) points out

if you are a conservative voter in America, you’re thinking, Carly won’t be a chump like that wimp Obama, who has let Putin walk all over him. That swelling in your chest is a jingoistic pride that you haven’t felt during the long, dark years that the Kenyan Usurper has been destroying America from within.

Or this could be about drugs, given that as Fiorina was diplomatically advised she was not up to date with her facts about marijuana, she decided to lecture the interviewer with "So I will also tell you something else. We lost a daughter to addiction."   What this has to do with marijuana (especially given her daughter died from a combination of alcohol, prescription drugs, and bulimia)  the publicly-truthless (thank you, Charlie Pierce) candidate didn't mention. But when the point is"I'm right, you're wrong, shut up," it doesn't really matter.

There is, however, at least one more insidious, and potentially more damaging, distortion coming from Fiorina, as illustrated by her exchange with the host on Sunday's Meet The Press:

Do you believe any of the money Planned Parenthood uses is for good, from the federal government?

I just visited one in South Carolina. They are all privately funded. This is hypocrisy on Democrats' part. This is about a political slush fund. It is about the character of our nation. And yes, we should stand up and fight on this issue.

Thus is the impression left that Planned Parenthood can be eviscerated and centers also "very much focused on women's health"  left intact. But it's unlikely Fiorina is talking about outfits whose main focus is on women's health but rather about crisis pregnancy centers, unregulated and unlicensed, which help pregnant women, though primarily try to talk them out of abortions.

After checking in, I was introduced to my "counselor," a conservatively dressed middle-aged woman who led me to one of the back rooms. She sat across from me with some forms on a clipboard I was not permitted to see. Much like the décor, the set-up reinforced the sense of professionalism and expertise. The consultation began with the standard questions: name, address, age, date of last period?

Right as I began to relax, the Q&A took a turn for the personal and invasive. "What is your relationship with your parents like?" "How is your financial situation?" "Have you told the father?" "What is his religion?" "Are his parents religious?" "How many people have you slept with?" "Would your parents be excited about a grandchild?"

As I sat there having my life probed, the purpose of the questions dawned on me. In case the test was positive, my "counselor" wanted to know which tactic to use to persuade me to continue the pregnancy -- exactly where my resolve was the weakest. Was there a loving Christian boyfriend who would make a great dad? Did I have kind supportive parents who would be excited by the idea of a grandchild? I knew I wasn't pregnant -- knew exactly what she was doing -- knew she wasn't a doctor. But my body reacted instinctively to her questions with guilt and shame. It felt like a kick in the gut when she asked if I had told my brother about the baby, and I felt a creeping sense of selfishness as I imagined the door slamming on my shared apartment, my twenties, my life. Would my parents want me to have this child? Would it matter?

The woman stopped between questions to comment on my answers and lie. "Oh, you've taken birth control. Let me tell you how that causes cancer and is the same a medication abortion." I was told abortion would scar me for the rest of my life -- would damage all of my future relationships and leave me "haunted." I was told the pill could cause breast cancer, that condoms are "naturally porous" and don't protect against STIs, and that IUDs could kill me. She lectured and lied to me for over an hourbefore I even received the results of my pregnancy test.

Also interspersed in the deception were subtle judgments of my life decisions. "So you do have some scruples about you," she said at one point, referring to my low number of sexual partners. One of the most disturbing comments came when I was pressed about the sexual experience leading to my visit, the reason I supposedly needed a pregnancy test in the first place. I told her an all too common story of acquaintance rape. I had been at a party, I said, severely intoxicated and unable to consent, "I didn't remember anything... I just wished it hadn't happened." Her response made it clear that the situation was my fault, "Oh so he took advantage of you. Well just don't do it again sweetie; just don't do it again." It made me sick.

It only got worse after a positive pregnancy test. At another CPC (the deceptively named "A Woman's Choice" in Falls Church, Virginia) I could hear two employees whispering before entering my room, plotting strategies to reveal the test results and best manipulate my reaction. When they did finally clue me in, my concerns were casually brushed aside and used as ammunition for their agenda: I could care for a baby with no job, my parents would certainly help, and I could absolutely handle the stress. They even argued that I could be a law student while pregnant: "It will probably be good for the baby," the woman said, "because you will be sitting down all of the time."

At this center and elsewhere, the conversations were always the same. It didn't matter how many times I said that l didn't want to be pregnant or be a mother the CPC staffer would continue to bully me. Their tactics were so blatantly manipulative that I should have been able to fight back. I wanted to have a response, some kind of self-defense. But I couldn't find anything to say. I am pro-choice feminist activist and I often discuss these kinds of difficult and emotionally sensitive topics at work and in school. Yet these women's so-called concern left me defenseless, struggling to find a response that didn't play right into their hands. 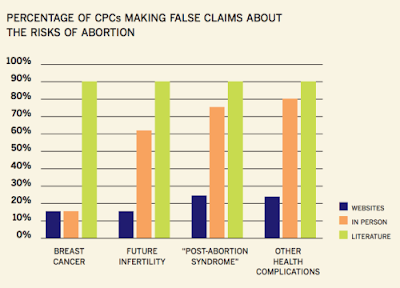 "There are," Bancroft writes, "over 58 CPCs, more than double the number of comprehensive reproductive healthcare centers in the state."  Across the nation- in which they outnumber abortion clinics approximately 3-to-1-  they are not all "privately funded," as the publicly-truthless candidate implies.   NPR explains the Guttmacher Institute

an abortion rights think-tank, cites seven states with line items in their budget for alternatives to abortion. Texas gives the most — more than $5 million over two fiscal years. Ohio budgeted $250,000 in 2013, and this year abortion opponents plan to boost their request to $1 million. Ohio and nearly two dozen other states also send smaller amounts to pregnancy centers through the sale of "Choose Life" license plates.

Fiorina is not alone in this deception.  In the last GOP debate, John Ellis Bush contended

There are 13,000 community-based organizations that provide health services to women, 13,000 in this country. I don’t believe that Planned Parenthood should get a penny from the federal government. Those organizations should get funding, just as I increased funding when I was governor of the state.

To be sure, Fiorina (as outlined by Legum) is the master demagogue. It must be difficult for Republicans and wayward independents to recognize as excrement anything stated so resolutely and confidently, sometimes with warped statistics. In light of the effort of congressional right-wing extremists to shut down the government over contraception and women's health care, its most dangerous expression probably is the growing myth that there is an extensive array of viable alternatives to Planned Parenthood. 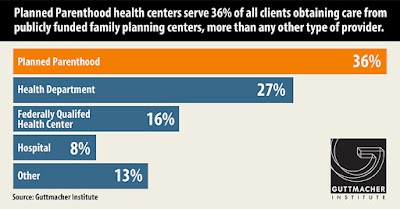