It would be humorous were it not so reprehensible.

That wouldn't be the awkward, inept performance of Utah Representative Jason Chaffetz as chairperson of the House Oversight and Government Reform Committee on Tuesday when Planned Parenthood director Cecile Richards was interrogated on the number of abortions and cancer screenings performed by the organization, Ms. Richards' salary, and something about the Congo.

Chaffetz was roundly criticized in part because he presented a chart purporting to show that abortions are up, and preventive services down, at Planned Parenthood, only to be informed a moment later by Richards (after consultation with counsel) that the chart was prepared by the anti-abortion rights outfit "Americans United for Life."  ("Richards states "some of the services, like pap smears, dropped in frequency because of changing medical standards about who should be screened and how often.") And as illustrated below by Kevin Drum, that chart itself was highly misleading. 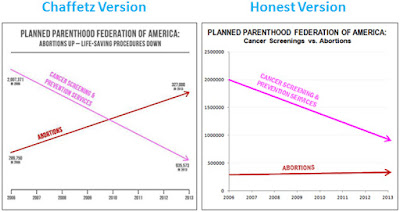 Chaffetz now has been forced to defend himself, maintaining "It wasn't a hearing about the videos. The hearing was about the funding of Planned Parenthood. They're doing all these things that don't go directly to women's health."

He should defend himself for his performance, though not for the reasons cited by National Review Editor Rich Lowry.

The ultra-conservative, yet Establishment Republican is embarrassed by Representative Chaffetz and his GOP cohorts who, he wrote, gave every sign of being underprepared and overmatched" and "like a team of paralegals squaring off with an accomplished mob lawyer."

If the comparison to organized crime were neither slimy nor direct enough, Lowry accused Richards of "defending the indefensible, which is her job. The slave trade, another enormity of American national life once accepted by a swath of the country, surely would have benefited from" her defense, he charges.

"Once upon a time in America," writes Lowry, "people believed that the Negro had no rights we were bound to respect. Today, Cecile Richards and her allies believe the same about human life in the womb." (Equating slavery with individual freedom for pregnant women, Republicans wonder still: why won't blacks vote for us?)

Slamming "grotesque disregard for human decency that attends" reproductive freedom, Lowry cleverly complains" Richards basically got away with murder, a core competency of her organization."  "Murder," illegal killing, is the anti-choice crowd's common characterization of legal abortion.   Just words, perhaps: in the same vein, perhaps I should blithely refer to Lowry as a "congenital liar."

That would be unfair, inasmuch as it would be incendiary. It would at least be a semantically defensible characterization of someone who would claim the organization Richards leads is "devoted to killing babies, whose organs are sometimes cut out and sold off."

Because Lowry's is a short statement, given it is inaccurate in only four ways:

1) The fetus, alive or not, is not yet a baby but a fetus.
2) Planned Parenthood is not devoted to killing babies, given that it is more intimately involved in preventive health care and contraception.
3) The organs are not "sold off" by Planned Parenthood, which receives only compensation for expenses.
4) Tissue, not organs, is conveyed.

Otherwise, right on target. However, Lowry demonstrates a knack for humor he did not realize he had.  He contends Tuesday's witness "is extremely skilled at defending the indefensible," which falls not only because Richards' position is eminently defensible but because he mistakes Richards, daughter of the late, great Ann Richards, for someone extremely skilled.

Most humorous- or at least ironic- is Lowry's attack on Chaffetz as having "wandered off on a tangent" at one point and having "damaged his credibility" at another.  Richard Lowry, let us recall, once breathlessly exulted

I'm sure I'm not the only male in America who, when Palin dropped her first wink, sat up a little straighter on the couch and said, "Hey, I think she just winked at me." And her smile. By the end, when she clearly knew she was doing well, it was so sparkling it was almost mesmerizing. It sent little starbursts through the screen and ricocheting around the living rooms of America. This is a quality that can't be learned; it's either something you have or you don't, and man, she's got it.