Condescension, But Not Where Claimed

Clinton brought up the exchange during a speech to the U.S. Hispanic Chamber of Commerce in San Antonio. She promised to stand up to the gun lobby and, dropping her G’s, added: “I’ve been told by some to quit talkin’ about this, to quit shoutin’ about this. Well, I’ll tell you right now, I will not be silenced, and we will not be silenced.” The crowd loved it. The next day in New Hampshire, Clinton tried the same line in a Yankee-friendly accent: “Some people say that we shouldn’t talk about it. Some say we shouldn’t shout about it, that I shouldn’t shout about it. Well, I think we have to keep talking. But more importantly, we have to act.”

A week went by. Clinton prepared for her Oct. 22 testimony before the House Select Committee on Benghazi. When she returned to the campaign trail on Oct. 23, in aspeech to the Democratic National Committee Women’s Leadership Forum, her account of the exchange with Sanders was no longer just about guns. It was about sexism. “You know,” she began—clearing her throat to signal the sound bite ahead—“I’ve been told to stop, and I quote, ‘shouting’ about gun violence. Well, first of all, I’m not shouting. It’s just [that] when women talk, some people think we’re shouting.” The audience hooted, screamed, and cheered. Clinton grinned. “I will not be silenced, because we will not be silenced,” she declared.

On social media, Clinton’s campaign made the new line—“When women talk, some people think we’re shouting”— her message of the day. Her team posted it on her Twitter feed at 8:30 Friday morning, two hours before her speech to the DNC forum, as a rebuke to “those who tell her to ‘stop shouting’ on issues that matter.” The quote also went up on her Facebook page and her campaign website, under the headline, “Hillary Clinton Just Said Something Women Have Been Thinking for Years.” The next day, at a Democratic dinner in Iowa, Clinton repeated the applause line: “I’ve been told to stop shouting about ending gun violence. Well, I haven’t been shouting. But sometimes, when a woman speaks out, some people think it’s shouting. But I won’t be silenced, and I hope you won’t be either.”

Without naming Sanders, Clinton is "using the story to bond with women, to paint Sanders as a patronizing old fart, and to portray herself as a victim."

Salon's Amanda Marcotte believes the Vermont senator directed his complaint about "shouting" to Clinton because she is a woman.   Marcotte, who usually writes convincingly about feminist issues, does not deny Clinton's motivation but

would ask the people who are getting all bent out of shape over this to put yourself in the shoes of the many women who found the exchange between Sanders and Clinton to be annoying. When a man is condescending to you, it’s often hard to tell if that’s just how he is to everyone or if it’s just women he talks down to. It gets even more complicated when you realize that a lot of men who are condescending toeveryone still turn the volume up even more when they’re talking to women.

And that is exactly how the “shouting” exchange felt during the debate. Yes, Sanders used the same general talking point in response to both Clinton and O’Malley. But he was more aggressive about it with Clinton, saying, “All the shouting in the world is not going to do what I would hope all of us want,” whereas he merely told O’Malley, “Here is the point, governor. We can raise our voices.” His tone and the amount of force he put behind this openly condescending talking point was very different. Telling women they’re just imagining things reads, in and of itself, like it’s sexist condescension.

And so, as Warner Wolf would say, let's go to the audiotape of the exchange between Sanders and Clinton::

CLINTON: No, not at all. I think that we have to look at the fact that we lose 90 people a day from gun violence. This has gone on too long and it’s time the entire country stood up against the NRA. The majority of our country...

(APPLAUSE) ... supports background checks, and even the majority of gun owners do. Senator Sanders did vote five times against the Brady bill. Since it was passed, more than 2 million prohibited purchases have been prevented. He also did vote, as he said, for this immunity provision. I voted against it. I was in the Senate at the same time. It wasn’t that complicated to me. It was pretty straightforward to me that he was going to give immunity to the only industry in America. Everybody else has to be accountable, but not the gun manufacturers. And we need to stand up and say: Enough of that. We’re not going to let it continue.

COOPER: We’re going to bring you all in on this. But, Senator Sanders, you have to give a response.

SANDERS: As a senator from a rural state, what I can tell Secretary Clinton, that all the shouting in the world is not going to do what I would hope all of us want, and that is keep guns out of the hands of people who should not have those guns and end this horrible violence that we are seeing. I believe that there is a consensus in this country. A consensus has said we need to strengthen and expand instant background checks, do away with this gun show loophole, that we have to address the issue of mental health, that we have to deal with the strawman purchasing issue, and that when we develop that consensus, we can finally, finally do something to address this issue.

Sanders has been giving this answer for years. He did it in July, after an O’Malley super PAC ad attacked him (“We have been yelling and screaming at each other about guns for decades,” said Sanders). He did it again in August, after a male surrogate for Clinton attacked him (“I can get beyond the noise and all of these arguments and people shouting at each other”). He did it again in October, after the mass shooting in Roseburg, Oregon (“People on both sides of this issue cannot simply continue shouting at each other”). Sanders gives this answer to everyone....

Yes, Sanders used the same general talking point in response to both Clinton and O’Malley. But he was more aggressive about it with Clinton, saying, “All the shouting in the world is not going to do what I would hope all of us want,” whereas he merely told O’Malley, “Here is the point, governor. We can raise our voices.” His tone and the amount of force he put behind this openly condescending talking point was very different. Telling women they’re just imagining things reads, in and of itself, like it’s sexist condescension.


Alert Hillary Clinton. for as Saletan observes, had the former Secretary of State perceived Sanders' "rebuke as sexist"

you’d expect her to have said so in her first accounts of the exchange. She didn’t. She waited more than a week before embellishing the story. She prepared it as a sound bite for social media, and she unveiled it at a women’s forum. And it worked, so she’s still using it.

The impact of rural vs. urban lifestyle as explanation for contrasting approaches to gun control is otherwise largely ignored.  Instead, "gun rights" advocates want few if any restrictions on the ability of anyone to possess firearms no matter where they live. Neither they nor gun safety proponents are willing to acknowledge that firearms represent something far different in northern Maine, Michigan's upper Peninsula, southern Idaho, western Virginia, or west Texas than they do in Philadelphia, Cleveland, St. Louis, Denver, or even Houston.

That is what Senator Sanders was trying to get across when he noted he is "a Senator from a rural state."  Senators have a knack for representing their constituents and as the chart below from Politifact indicates, in the period from  1999 to 2016, six of Hillary Clinton's ten biggest donors were from Wall Street. (The gun industry is conspicuously absent from the parallel Sanders' list.) 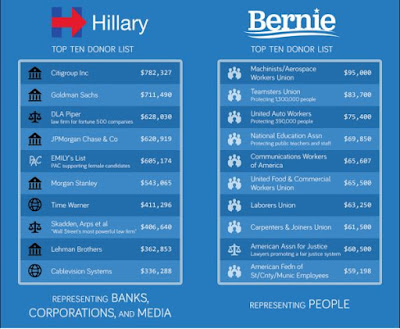 So, too, was the Vermont senator speaking of differing perspectives when he referred to "all the shouting in the world"  or when he told O'Malley "We can raise our voices, but I come from a rural state, and the views on gun control in rural states are different than in urban states, whether we like it or not."

Sanders' observation in the debate about "all the shouting in the world" and in July about "yelling and screaming at each other about guns" for decades was description, not prescription, and less opinion than observation, for he recognizes the obstacles to sensible gun regulation.   "Shouting in the world" is little different than "we can raise our voices, but" to a debater inclined to vary his syntax.

In a classic case of forcing someone to prove the negative, we cannot disprove Marcotte's contention that "Clinton’s talking point is also landing because it plays off not-unreasonable fears that a lot of women have that at least some of the Sanders support base is coming from condescending, know-it-all men who have unconscious issues with women in authority." But there is no hard evidence that "Sander's support base is coming from" such "know-it-all men." Clinton does not directly argue that, and Marcotte merely counts it as a legitimate fear, without providing substantiation.

"When women talk, some people think we're shouting," emphasizes the candidate hardly reticent about emphasizing the gender divide. Yet, without suggesting that Mrs. Clinton values women more than men or that her supporters are "man-hating females," Sanders, focusing on economic issues, is smeared as harboring some unconscious prejudice toward women. There is something wrong here, and it's not with Bernie Sanders or his supporters.