That's The Liberal Media Hoisting Him On Its Shoulders


Marco Rubio was right in a way, and not only right-wing.

He was correct, in a minor, insignificant, manner and not as he meant to be  During the recent GOP presidential debate, the Florida senator contended Hillary Clinton's testimony before the Benghazi committee became "the week she got exposed as a liar. It was the week that she got exposed as a liar -- but she has her super PAC helping her out, the American mainstream media."

The mainstream media, focused on the horse race and each candidate's won-loss record, did imply that the GOP members, far more concerned themselves with scoring political points than with embassy security, barely laid a glove on the former Secretary of State.

Nonetheless, that was the perspective also of a nice chunk of the conservative media.  We have libertarian conservative Matt Lewis live tweeting "Unless something happens, it's starting to look like Hillary Clinton won't merely survive this hearing -- she will have come out on top."  Brendan Michael Dougherty, formerly an editor at The American Conservative, wrote "Hillary = Lucy GOP = Charlie Brown Except the football is a grenade and Charlie Brown wrestles until he grabs it, unpins, and swallows it."   Suggesting the long-term political consequences, John Podhoretz tweeted "Why doesn't Pompeo just go over and swear her in for president now--if he goes on like this he'll practically get her elected."

This echoed the very mainstream Jonathan Allen of Vox, who wrote "it was a defining moment for Clinton's presidential aspirations. She handled the GOP’s questions with aplomb and without the patina of partisanship that has characterized the committee since its conception." As, fittingly, Mrs. Clinton's husband learned to his delight when Ken Starr went after him, there is nothing which will more effectively secure the Democratic base than to have overtly partisan Republicans try to destroy you. Trey Gowdy & Company might as well have been on the candidate's payroll.

Nevertheless, coming out of the presidential debate there is no politician anywhere with less of a right than Senator Rubio to denounce the "mainstream media" for running interference for a politician. Notwithstanding later polls which showed Ben Carson and Donald Trump still leading the pack, the verdict was Rubio by at least a TKO.

The Rubio victory had nothing to do with the merit of his response to arguably the most substantive issue posed all night, when CNBC's John Harwood pointed out that the Tax Foundation "scored your tax plan and concluded that you give nearly twice as much of a gain in after-tax income to the top 1 percent as to people in the middle of the income scale."

Rubio conceded "numerically, it’s gonna be higher" while arguing "the greatest gains, percentage-wise, for people, are gonna be at the lower end of our plan..."  He stated also "Yeah, but that — because the math is, if you — 5 percent of a million is a lot more than 5 percent of a thousand. So yeah, someone who makes more money…"

The Annenberg Policy Center, responsible for factcheck.org,  however found

The Tax Foundation concluded that Rubio’s plan, when scored “dynamically” to account for expected economic growth, would result in an after-tax income increase of nearly 28 percent for those in the top 1 percent, while those in the middle income deciles — 40 percent to 50 percent and 50 percent to 60 percent — would see their after-tax income rise by 15.7 percent and 15.3 percent, respectively. People with incomes in the lowest 10 percent would see the greatest percentage gains, nearly 56 percent.

In other words, the greatest percentage income gains would be realized by those with low or high incomes, with smaller percentage gains for those in the middle....

Rubio further confused the issue with his explanation that “5 percent of a million is a lot more than 5 percent of a thousand.” As we noted earlier, it’s not just that those in the top 1 percent of tax filers would be seeing greater dollar savings in Rubio’s plan than those in the middle income brackets, it’s that those at the top would see a greater percentage gain as well.

Emphasizing style over substance, the mainstream media gave both Clinton and Rubio an "A" for their performances.  Clinton displayed more substance, though Rubio effectively tossed aside Hargrove's question by denying that his plan, better for low-income than middle-income taxpayers, is best for the wealthiest (graph below from the Tax Foundation via Media Matters),  If Mrs. Clinton runs an ad next fall slamming Marco Rubio for targeting the middle clas, he'll need to do some fast talking. 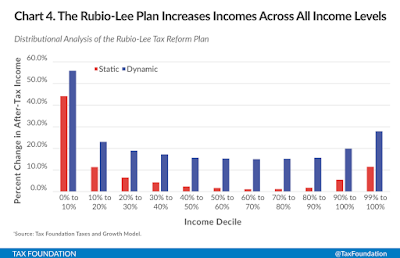