When Ronald (6) Wilson (6) Reagan (6) died in 2004, Peggy Noonan, the late president's speechwriter columnist for The Wall Street Journal (of course), penned a love letter to the ex-president. She remarked

It's not hard to imagine him now in a place where his powers have been returned to him and he's himself again -- sweet-hearted, tough, funny, optimistic and very brave. You imagine him snapping one of those little salutes as he turns to say goodbye. Today I imagine saluting right back.

And those were the most nuanced things she had to say about the 'ol lug.  While still a great writer and yet with the WSJ, Noonan is bold enough neither to condemn Donald Trump's nastiness nor to praise him. Instead, she comments

The only thing I feel certain of is how we got here. There are many reasons we’re at this moment, but the essential political one is this: Mr. Obama lowered the bar. He was a literal unknown, an obscure former state legislator who hadn’t completed his single term as U.S. senator, but he was charismatic, canny, compelling. He came from nowhere and won it all twice. All previously prevailing standards, all usual expectations, were thrown out the window.

I don't know about Reagan's campaign pledges but I have little doubt he accomplished what he set out to do.  With a chart he credits to the Center for American Progress, Thom Hartmann explains

Other policies, like protective tariffs and strong labor laws also help build a middle class, but progressive taxation is the most important because it is the most direct way to transfer money from the rich to the working poor, and to create a disincentive to theft or monopoly by those at the top.

History shows how important high taxes on the rich are for creating a strong middle class.

If you compare a chart showing the historical top income tax rate over the course of the twentieth century with a chart of income inequality in the United States over roughly the same time period, you’ll see that the period with the highest taxes on the rich – the period between the Roosevelt and Reagan administrations – was also the period with the lowest levels of economic inequality.

You’ll also notice that since marginal tax rates started to plummet during the Reagan years, income inequality has skyrocketed.

Even more striking, during those same 33 years since Reagan took office and started cutting taxes on the rich, income levels for the top 1 percent have ballooned while income levels for everyone else have stayed pretty much flat. 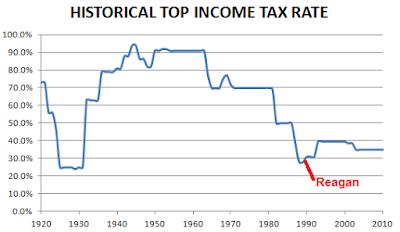 Aided by another chart from the Center for American Progress, Hartmann noted that union membership started to decline in 1967 but began to plummet in the first Reagan Administration. 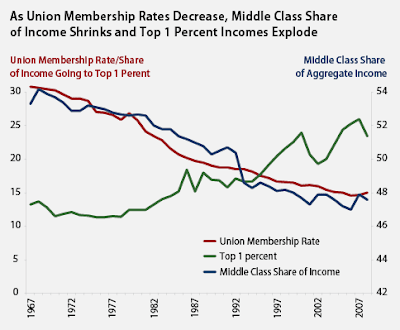 The plunge was no coincidence.  In an interview last year, Joseph McCartin, Professor of History at Georgetown University, recalled

Labor was a prominent power in 1981. When the air traffic controllers went out on strike 33 years ago yesterday, on August 3, 1981, the labor movement was still seen as a central force in American government and politics. Both parties, Republican and Democrat, saw labor that way.

It was an important moment in American history, though, because Ronald Reagan was in the first months, really, still, of his presidency. He'd been inaugurated in January, 1981. And he was in the middle of rolling out what we call the Reagan revolution. And Reagan wanted to really turn back the clock, you might say, to an approach to American government and politics that was pre-New Deal. And part of that meant reorganizing the relationship between government and the labor movement.

The PATCO strike happened at this important turning point in American history, and it left a very profound legacy, because, as you say, Ronald Reagan first threatened those strikers to return to work within 48 hours of their walkout, and when they did not, he fired them. Not only did he fire them; he permanently replaced them. And with that action, he sent a powerful message that many employers even in the private sector acted upon after that, and it was a period of getting tough with the union movement that a really marked a profoundly important turning point.


The confluence of the beginning of the Reagan presidency and the downturn of economic indicators is stunning. Dave Johnson displays three graphs (the first from Emmanuel Saez via whitehouse.gov, the third from Federal Reserve Z-1, Bureau of Economic Analysis): the increasing share of total income flowing to the top 10%; the decline in the U.S.A.  personal savings rate; the decline in savings of the American people. 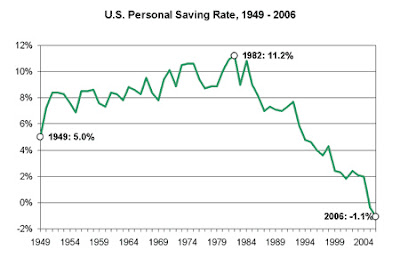 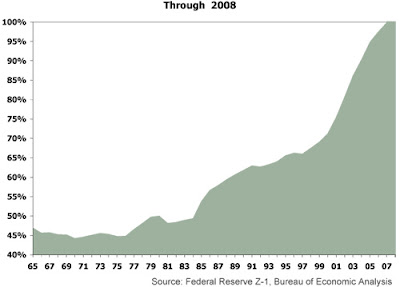 President Reagan got "tough" with PATCO and declared "They are in violation of the law, and if they do not report to work within 48 hours,they have forfeited their jobs and will be terminated."  As the media and the right, including Peggy Noonan, swooned, the legend of the swashbuckling, macho president was born. Organized labor, and the workers it represents, hasn't been the same since. Or as Noonan herself would put it: done, done, done, done, done, done, and done.