Still Naive After All These Years


The Vice-President of the United States has finally bowed out of a race he never completely entered, and Elias Isquith points out

Biden’s words weren’t exactly Churchillian in their grandeur or Lincolnian in their eloquence; but the sentiment he expressed — the firm belief that the American people are not as divided as they seem; that some of the most vexing and bitter policy disputes troubling the country are, “at their core,” deceptively simple — is beautiful.

Included in Joe Biden's sentiment was

I believe we have to end the divisive partisan politics that is ripping this country apart, and I think we can. It’s mean-spirited, it’s petty, and it’s gone on for much too long. I don’t believe, like some do, that’s it naive to talk to Republicans. I don’t think we should look at Republicans as our enemies. They are our opposition, they are not our enemies. And for the sake of the country, we have to work together. As the president said many times, compromise is not a dirty word.

"Unfortunately," observes Isquith, Biden's beautiful words "are also not true."  Clearly, naivete is something Joseph Robinette Biden is very, very familiar with because he maintained

... at their core, every one of these things is about the same thing — it’s about equality, it’s about fairness, it’s about respect. As my dad used to say, it’s about affording every single person dignity. It’s not complicated. Every single one of these issues is about dignity and the ugly forces of hate and division. They won’t let up, but they do not represent the American people. They do not represent the heart of this country. They represent a small fraction of the political elite; and the next president is going to have to take [them] on.

Joe Biden has worked under, and with, President Obama for nearly seven years and appears really, truly, to believe this. He has forgotten or disregarded the words of House Majority Leader Kevin McCarthy:

Everybody thought Hillary Clinton was unbeatable, right? But we put together a Benghazi special committee. A select committee. What are her numbers today? Her numbers are dropping. Why? Because she’s untrustable. But no one would have known that any of that had happened had we not fought to make that happen.

Elijah Cummings of Maryland, Ranking Democrat on both the Benghazi and Oversight committees in the House, has responded to McCarthy:

He did not mention the four Americans killed in service of their country, raise any questions that were not answered by multiple previous investigations or offer any concrete proposals to enhance security for our diplomats overseas.

His stunning confession revealed the truth that Republicans never dared admit in public—that their core goal in establishing the Benghazi Committee was to use taxpayer funds for a political campaign against Hillary Clinton.

The Benghazi Committee has now spent more than $4.5 million in one of the longest and least productive congressional investigations in history. It has held no hearings of any kind since January, and Republicans have completely abandoned their plans to hear public testimony from top defense and intelligence officials so they can focus almost exclusively on Hillary Clinton.

Perhaps Biden believes Hillary Clinton is particularly divisive.  However, opposition to anything Obama has been the hallmark (Garry Trudeau's Doonesbury of 5/24/15) of Republicans in Congress and in the media for the past seven years- and the previous Democratic president was impeached over sex. And the current GOP outrage is not only over the likely next Democratic nominee, as Cummings describes when continuing

Now House Republicans want to use this same model to attack the Constitutional rights of women—rights which have been affirmed by the Supreme Court—to determine their own healthcare decisions in consultation with their doctors.

Republicans have threatened to shut down the government, they have ousted their own House speaker and now they want to set up a new select committee to attack Planned Parenthood.

This week, Cecile Richards, the head of Planned Parenthood, testified before the Oversight Committee. She had already provided tens of thousands of pages of documents, so even Republicans had to admit that she has been extremely cooperative. Ms. Richards came armed with the facts, she was assertive and strong in her defense of the rights of women, and she was compelling.

She explained the critical services—such as breast exams, pap tests, cancer screenings, and contraceptive services—that Planned Parenthood affiliates across the country provide to millions of women who are often uninsured, poor, or living in medically underserved areas. She also highlighted the fact that, after four congressional hearings by three standing House committees, Republicans have failed to identify any credible evidence to support their repeated claims that Planned Parenthood sold fetal tissue for profit in violation of federal law.

Tellingly, Republicans refused to invite David Daleiden, the radical extremist whose group engaged in a host of potentially illegal activities during his failed three-year crusade of deception to try to entrap Planned Parenthood. (Daleiden’s lawyers have indicated in separate litigation that he plans to take the Fifth.)

Recognizing this failure, Republicans changed course during the hearing and actually tried to attack Ms. Richards’ salary, as if it were somehow inappropriate for a woman who leads a renowned national organization to make six figures. 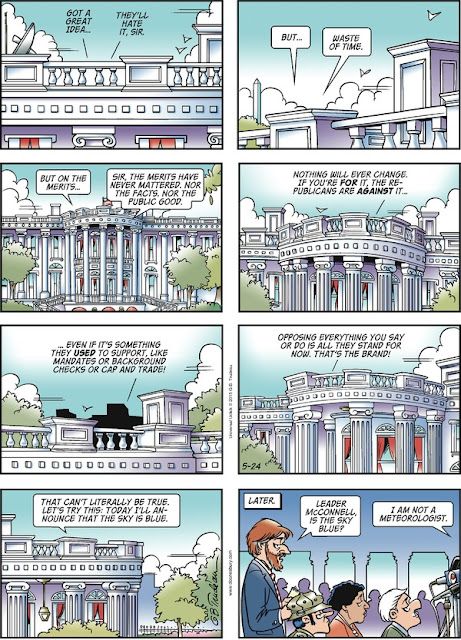 The attack on Planned Parenthood is especially evocative of the GOP's impulse to block and obstruct, given that the birth control services provided by the organization decrease the rate of abortion, a procedure against which Republicans rage.  Ms. Richards' substantial salary may have been the only thing about her testimony, or about Planned Parenthood, congressional Republicans actually liked. They've never had a problem with exorbitant CEO salaries.

Cummings believes Republicans "should join Democrats to investigate issues that actually need attention, such as the skyrocketing prices of prescription drugs." As he no doubt is aware, there is a fat chance and a slim chance of that occurring, and slim is on its way out of town.

So with a rhetorical flourish and mostly good intentions, Joe Biden has declined to seek the top spot on the Democratic ticket.    That's good for the Party- and for himself. When Hillary Clinton was asked at the recent debate "which enemy are you most proud of?" she wisely replied "well, in addition to the NRA, the health insurance companies, the drug companies, the Iranians. Probably the Republicans."  If Joe Biden had announced he would run, he would have participated, and may have been stumped for an answer.